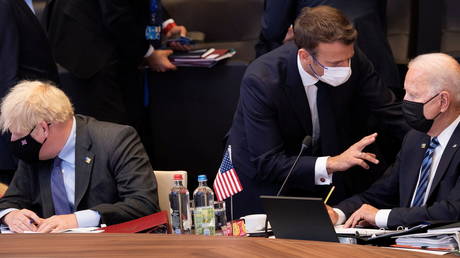 FILE PHOTO: French President Emmanuel Macron talks with US President Joe Biden before a plenary session at a NATO summit in Brussels, Belgium on June 14, 2021 ©  Brendan Smialowski/Pool via REUTERS

French FM Jean Yves-Drian has continued to criticize the US and Australia for the AUKUS submarine deal, meant to go to Paris, insisting there may be major consequences to French-US relations and for the transatlantic alliance.

“There has been lying, duplicity, a major breach of trust and contempt. This will not do,” Foreign Minister Le Drian told the press on Saturday.

Paris’ ambassadors to Canberra and Washington have been recalled in response to the deal, and Le Drian had previously described Australia ditching the pact between the two countries as a “stab in the back.”

“The fact that, for the first time in the history of relations between the United States and France, we are recalling our ambassador for consultations, is a grave political act that shows the intensity of the crisis today between our two countries and also with Australia,” Le Drian told media on Saturday. (RT)