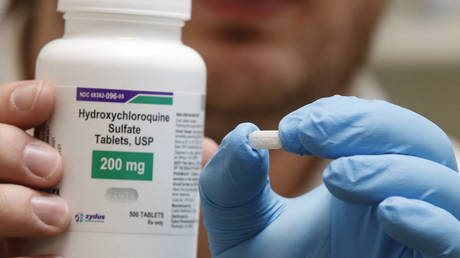 A French doctor was hauled off to jail following an altercation with a bailiff who had attempted to bring him before a professional council regarding his unorthodox (but legal) prescription of controversial Covid-19 drugs.

Dr. Jean-Paul Théron was arrested in French Polynesia days after allegedly “throwing objects” at a bailiff who had arrived at his practice to summon him to a professional regarding his use of the controversial Covid-19 treatments hydroxychloroquine and ivermectin, France24 confirmed on Thursday.

While early coverage of Théron’s arrest implied he had been arrested for merely prescribing the drugs, a “Truth or Fake” segment on the French network confirmed it was his alleged attack on the bailiff last Thursday that had led to his “brutal” arrest.

Théron allegedly pelted the bailiff with unspecified objects when the officer attempted to issue him with a complaint filed by the Council of the Order of Physicians. The ‘attack’ apparently put the bailiff out of commission for eight days as a result of injury and stress.

Read more:   "Everything in the liberated lands must be done in a planned manner" - President Aliyev

Footage of Théron’s arrest posted to social media shows the chaotic scene as nearly half a dozen officers manhandle the doctor out of what appears to be his office.

A social media post from an account purporting to belong to his daughter claimed the doctor had been arrested while washing his hands after using the toilet, and spoke of the “brutality and humiliation” and “shock” of being arrested while answering nature’s call. (RT)