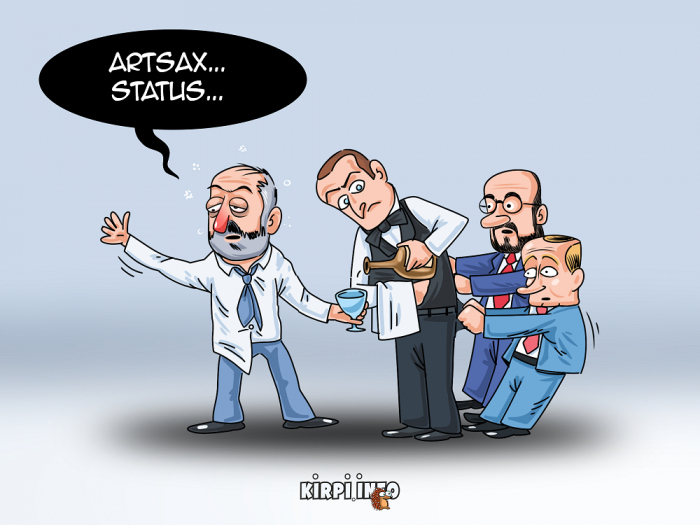 Earlier this month, acting Armenian PM Nikol Pashinyan visited Russia. Following European Council President Charles Michel’s visit to Armenia, then to Azerbaijan and discussions with the leaders of the two countries, President of Azerbaijan Ilham Aliyev visited Russia and met with his Russian counterpart Vladimir Putin. It is an indication of growing international attention to the South Caucasus after the war and the competition between the West and Russia to strengthen their influence in the region within the new realities.

In the light of the competition between Moscow and Brussels for influence in the Caucasus, the strategy pursued by llham Aliyev can be considered successful in terms of the interests of our country. President explains the reason: ” I have a very precise idea of the steps before, during and after the war. I know what, when and how we need to do things. In this area, and indeed in all areas, there is a conceptual approach.”

Unlike Azerbaijan, the growing attention to the region creates additional international pressure on Yerevan. Armenia, which tries to get rid of the pressure, has all its hopes for France. Pashinyan believes that Macron’s visit to Yerevan will help him to avoid pressure from Moscow and Brussels.

The main issue for Pashinyan is to make the impression that “Nagorno-Karabakh conflict has not been resolved”. In this regard, Armenia tries to draw the OSCE Minsk Group to the process and restart negotiations.

With this way, Pashinyan tries to create an illusion in Armenian community that they are not defeated and obtain extra time. Considering the fact that only half of the voters participated in the elections and half of the voters cast their ballots to Pashinyan, it becomes clear that the new government doesn’t have a stable public stand and there is a risk of mass protests against the government. The Armenian society cannot accept new realities.

President Ilham Aliyev’s reaction to the psychological situation in Armenian society during the post-war period indicates that it has been one of  the topics of discussion during the meeting.

“Armenia’s disappointment is caused by the fact that they are still daydreaming, of course. They cannot come to terms with the post-war realities. I believe that the psychological factor also plays a role here. Apparently, they need some time to get used to the new realities from a psychological point of view, because our Victory smashed all their ideological foundations to smithereens,” President Aliyev said.

“I understand that it is not easy to realize this, to live with this reality and to get used to it. Therefore, we must take this psychological reality into account. But at the same time, I have to say that Armenia should not make the same mistakes again because their inappropriate and unacceptable actions and statements cost them very dearly. The second Karabakh war showed this. Therefore, there is no need to waste breath,” Ilham Aliyev also added.

Henceforth, neither Russian President Vladimir Putin, nor EU President Charles Michel has used the terms “Nagorno-Karabakh conflict” and “status”. This shows that neither the West nor Russia intends to “consider the psychological situation” and give Pashinyan time to strengthen the power. It has objective reasons: Moscow and Brussel compete for influence in the region and cannot sacrifice their interests for protection of Armenia politician’s power. At least, Europe can compensate Armenians for their “psychological shock”, which is the purpose of possible allocation of a 2.6 billion euro grant. More precisely, Pashinyan is allocated funding to strengthen his power, calm people down and prevent possible political crises, so that no obstacle will exist for implementation of Europe’s projects in the region. Similar funding is being allocated with the same purpose for Georgia, which has not been able to get out of the political crisis yet. Europe does not want any political crisis in those countries.

France is a single country which supports Pashinyan in his claim that “Nagorno-Karabakh conflict is not over”. The French ambassador’s remarks on the Minsk Group and the “status” during his meeting with Pashinyan boosted the Armenian leader’s confidence in Macron. This very expectation pushes Armenia to protract Zengezur corridor project and trilateral meetings. It can be said that the provocations in the region are being implemented with joint decisions of Paris and Yerevan. During the meeting with Azerbaijani President in Moscow, President Putin said that the settlement of the situation remains one of the major issues in the region. Russia’s Putin also thanked President Aliyev for ‘finding compromise decisions’. With such a subtle diplomatic language, Putin wants to thank President Aliyev for not getting scabbed by Armenia by approaching the provocations cold-bloodedly. It becomes clear that the main purpose of the provocations is to harm relations between Russia and Azerbaijan and form the opinion on Russia’s inability in ensuring security in the region. Here France’s interests hidden behind these games can be seen clearly.

Can France live up to expectations of Armenia? Or can Paris act against the will of the European Union and implement its dictation regarding the region?

Here Azerbaijani President indirectly hints to the cooperation of the EU leader’s between Armenia and France, which could hinder the establishment of peace in the region. The message means that either the EU will have to demonstrate its will against this cooperation, or Azerbaijan will have to work separately with the nine European strategic partners to curb Paris.