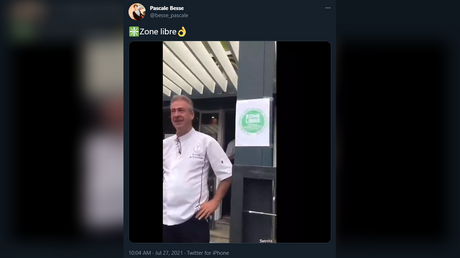 People in France have shown their support for a restaurateur who declared his eatery a ‘free zone’ in response to the government’s vaccine passports mandate for restaurant and bar entry amid widespread protests.

With the government set to require all people to how their Covid-19 health passport when entering bars and restaurants from the beginning of August, some in France have started their own campaign to rebel against what they described as the state’s “health dictatorship.”

The tweet reads: “Zone Libre becomes the slogan of opponents of the health dictatorship,” adding the hashtag “Zone Libre” and “No to the Shame Pass.”

The tweet is accompanied by an image of a sign that reads: “Here, we respect your freedom, your dignity and medical secrets.” The message on the outside of the sign says “All welcome, with or without a health pass.”

While the account itself hasn’t received much attention, a video of chef Michel Le Menn sticking the sign to the facade of his eatery has been widely shared across social media. The restaurant, ‘Le Coup de Fourchette’ is reportedly located in Brest, a port town in Brittany.

In the footage, people can be seen photographing the ‘Zone Libre’ sign while the crowd chants “Liberte” or “Freedom.” (RT)