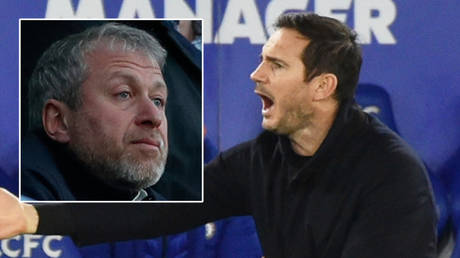 Frank Lampard could be the next casualty to land on the Premier League managerial scrapheap amid reports that owner Roman Abramovich is considering a change as stuttering Chelsea continue to stagnate.

Further pressure was heaped upon Lampard by his side’s 2-0 defeat to Leicester City this week, the team’s fifth defeat in eight league games – a run which has left big-spending Chelsea rooted in eighth position in the English top flight.

The run of poor form has been compounded by the considerable spending spree overseen by Abramovich prior to the start of the current Premier League campaign, which saw Lampard bring in a host of top talent including highly-regarded German internationals Kai Havertz and Timo Werner.

Neither have hit the ground running, leading to concerns that Abramovich may opt to cut his losses on novice manager Lampard and look to steady the Stamford Bridge ship by installing one of Europe’s more experienced coaches.

Lampard sprung to the defence of his “transitional” side following their defeat to Brendan Rodgers’ Leicester, but admitted in his post-match interview that his future at the club at which he is the all-time top goalscorer is out of his control.

Chelsea’s promising start to the campaign led to suggestions that the team could be realistic challengers for the Premier League title but the slump in performances appears to have ended talk of that possibility.

Names being linked include former Juventus boss Max Allegri and Thomas Tuchel, the German who was recently replaced at Paris Saint-German by Mauricio Pochettino.

Also on rt.com Granovskaia relations & absent fans: The reasons to suggest why Chelsea owner Abramovich WILL NOT wield axe with Lampard

However, Abramovich and Chelsea are only thought to be considering a change if they believe that a new boss could engineer improved performances from the club’s galaxy of stars.

Lampard’s fellow Premier League managers Ole Gunnar Solksjaer and Mikel Arteta have also endured prolonged periods of poor form during their tenures but recent evidence suggests that they have managed to reverse their fortunes – leading to suggestions that Lampard should be afforded similar time to turn things around.

Chelsea’s upcoming games with Luton Town in the FA Cup and Wolves and Burnley in the Premier League are thought to be crucial for Lampard’s future with the club, lest Abramovich decide to make a change at the top and install what would be his 13th manager since he purchased the club 18 years ago. (RT)