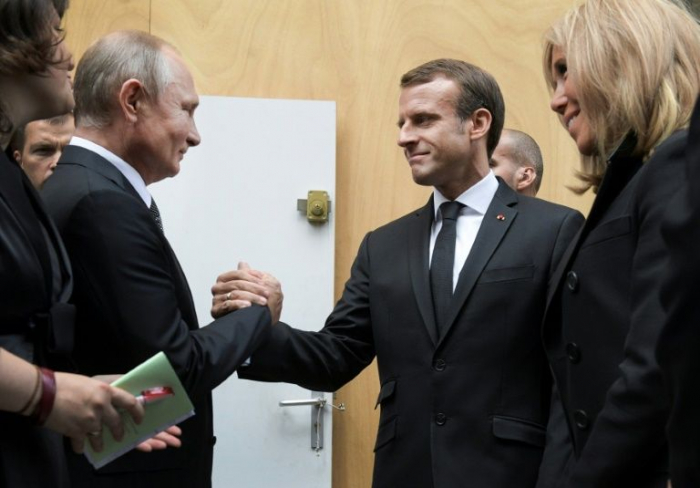 Russian President Vladimir Putin will meet his Ukranian counterpart Volodymyr Zelensky in Paris on December 9 for their first face-to-face encounter, seeking to end the half-decade conflict in Ukraine, the French presidency said Friday.

The leaders will join French President Emmanuel Macron and German Chancellor Angela Merkel for the four-way summit aimed at resolving the conflict in the east of Ukraine, where pro-Moscow separatists have declared breakaway regions, the Elysee Palace said.

Macron, who has been spearheading a drive for peace in Ukraine, had hoped to host the summit in September but it was held up by numerous obstacles that highlighted the difficulty of resolving the conflict.

The Elysee said there had been “major progress” recently in talks between the sides, which had allowed troops to pull back from some key conflict areas.

The presidency said the meeting “will allow the opening of a new series of steps to put in place the Minsk agreements” of 2014 and 2015 which sought to end the conflict, but have yet to be properly implemented.

The Ukrainian presidency confirmed the date of the meeting, adding that Macron has spoken to Zelensky by telephone.

The meeting between Putin and Zelensky has been highly anticipated for months, after the former comedian came to power in May on the back of pledges to bring peace while regaining Kiev’s control over the breakaway regions.

The Ukrainian army and Moscow-backed separatists had on Saturday launched the last phase of a troop pullback seen as a precondition for the summit to take place.

The encounter would attempt to end a conflict which saw pro-Moscow separatists declare unrecognised breakaway statelets in the Ukrainian eastern regions of Donetsk and Lugansk and has left more than 13,000 dead.

Ukraine and its Western allies accuse Moscow of giving financial and military backing to separatists, which Russia denies.

In the run-up to the planned summit, Ukrainian, Russian and separatist negotiators also agreed on a roadmap that envisages a special status for the separatist territories if they conduct free and fair elections under the Ukrainian constitution.

But Zelensky also needs to tread a fine line as his plans have met with strong criticism at home, especially from war veterans and nationalists.

Thomas Greminger, secretary general of the Organization for Security and Co-operation in Europe (OSCE), warned that the apparent “progress should not be overestimated.”

“There are still issues that need to be cleared up,” notably regarding the special status of the separatist territories and the elections, the OSCE chief told the Saturday edition of French newspaper Le Monde.

Macron, who held a lengthy meeting at his summer residence with Putin in August, has courted controversy in recent months by pressing for dialogue with Russia.

In an interview with The Economist last week, he said that “if we want to build peace in Europe, to rebuild European strategic autonomy, we need to reconsider our position with Russia.”

Examining Russia’s long term strategic options under Putin, Macron said in the interview that Russia could not prosper in isolation, would not want to be a “vassal” of China and would eventually have to opt for “a partnership project with Europe.”

“We need to reopen a strategic dialogue, without being naive and which will take time, with Russia,” said Macron.

The conflict in the east of Ukraine broke out after Russia’s 2014 annexation of the Ukrainian peninsula of Crimea, which plunged Moscow’s relations with the West into a deep freeze.

Macron has also said Russia could be readmitted to the G8 club of top global nations — from which it was expelled in 2014 after the annexation of Crimea — if the Ukraine conflict was resolved.

The four-way summit is known as the “Normandy format” after a first meeting brought together the four heads of state in Normandy in 2014.

The last such meeting took place in Berlin in October 2016, before Macron took office and while Zelensky’s predecessor Petro Poroshenko was still in power.

OSCE chief Greminger said it was in Russia’s interest to resolve the conflict.

“This war is costing Moscow dearly,” he said.

Russia was “paying for it in terms of sanctions, in terms of the costs of backing the conflict and in terms of its reputation, which is also suffering.”