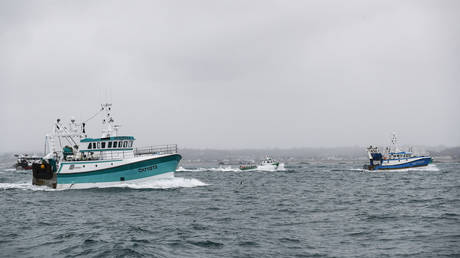 FILE PHOTO: French fishing boats return home after a protest in front of the port of Saint Helier off the British island of Jersey © AFP / Sameer Al-Doumy

French Secretary of State for European Affairs Clement Beaune has hit out at the UK once again over the ongoing fishing dispute, warning that Paris will not sit idly by if Britain fails to grant licences to French fishermen.

In an interview published by the Journal du Dimanche on Sunday, the official said that some 40 licences are still pending approval. While he is confident that they get through, he said that France “will not hesitate to take retaliatory measures in other areas, such as access to financial services” if they are denied.

This is not the first time Beaune has warned about France taking retaliatory steps on the UK’s financial sector. Last month, the official said Paris will not give authorizations for financial services the UK has asked for “until we have guarantees that, on fisheries and other issues, the UK respects its commitments.” (RT)