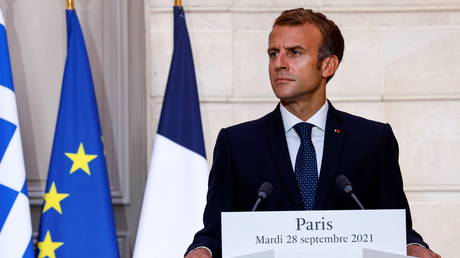 President Emmanuel Macron has asserted that France is still “an Indo-Pacific power regardless of any contract,” following a three-way snub by the UK, US and Australia that saw Canberra bin a major French submarine deal.

Speaking on Tuesday at a press conference, Macron insisted that Australia’s decision to scrap the multi-billion-euro contract it had with France’s Naval Group does not change his country’s strategy in the region.

France remains “an Indo-Pacific power regardless of any contract,” Macron said, citing that it has “numerous joint operations and partners,” as well as more than a million “compatriots” and over “8,000 soldiers” in the region.

The president, who had just announced a deal with Athens to supply Greece with French frigates, called for Europeans to “stop being naive” in defending its interests and developing its own military capacities. “When we are under pressure from powers…we need to react and show that we have the power and capacity to defend ourselves,” he added. “Not escalating things, but protecting ourselves.” (RT)