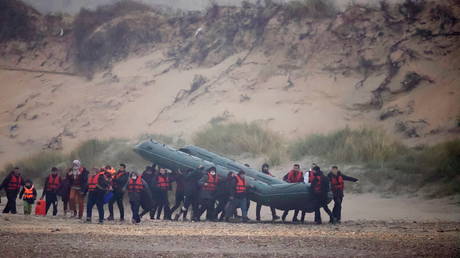 A group of more than 40 migrants run through the Slack dunes with an inflatable dinghy, to leave the coast of northern France and to cross the English Channel, near Wimereux, France, (FILE PHOTO) © REUTERS/Gonzalo Fuentes

France’s Europe minister has accused the UK of practicing an economic model that allows for “quasi-modern slavery,” as Paris called on London to change its policy on legal migration to prevent more Channel crossings.

France has hit back at the UK over the ongoing English Channel crossing row after London urged Paris to do more to prevent migrants casting off from its shores. Speaking on Monday to France Inter TV, French Europe Minister Clement Beaune claimed that Britain’s economic model allows for the exploitation of illegal workers. (RT)