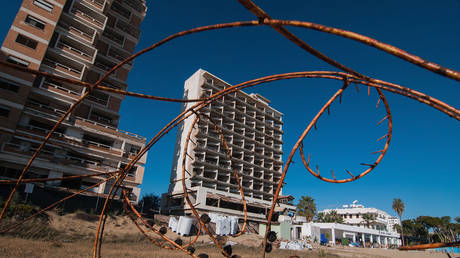 An abandoned hotel is seen in the Varosha quarter of the beach on January 5, 2017 in Famagusta, Cyprus. © Awakening/Getty Images

France has criticized a decision made by the Turkish Cypriot authorities to partially reopen the desolate town of Varosha, in Famagusta, which could mean people potentially settling in the area in the future, violating UN law.

A spokesperson for Jean-Yves le Drian, the French foreign minister, expressed France’s condemnation of Turkey’s plans to partially reopen Varosha on Wednesday: “France strongly regrets this unilateral move, upon which there had been no consultations, which constitutes a provocation and harms re-establishing the confidence needed to get back to urgent talks over reaching a fair and long-lasting solution to the Cypriot question.”

The statement follows Turkey’s announcement on Tuesday that Varosha, which has been deserted for almost 50 years, would be partially reopened to civilians, allowing former residents to reclaim property and settle again in the Turkish-held southern quarter of the once-bustling seaside resort of Famagusta. Famagusta was abandoned when it was declared a buffer zone between the Turkish and Greek communities of Cyprus, after the Turkish military intervened as a guarantor power following a Greece-inspired coup attempt in 1974.

Turkish President Recep Tayyip Erdogan announced the decision while visiting Northern Cyprus on Tuesday, saying that, with the reopening of Varosha, “a new era will begin … which will benefit everyone.”

Greece and Cyprus did not share Erdogan’s joy, and expressed their concern on Tuesday. The president of Cyprus, Nicos Anastasiades slammed Turkey’s “effort to alter the status quo,” while Greece’s Foreign Ministry implored Turkey to stop its “lawless behavior and comply with international law.”

The UK, which ruled over Cyprus as a former colony, issued a statement expressing that it was “deeply concerned” over the events on Tuesday. Anthony Blinken, the US secretary of state, slammed the move as “inconsistent with UN resolutions, unacceptable and incompatible with past commitments to resume settlement talks.”
(RT)

Norway to increase gas supplies to Europe amid soaring prices

Against the backdrop of a sharp rise in gas prices in Europe, the Norwegian company…

09:13 Erdogan: Azerbaijan put end to occupation by using its right to self-defense