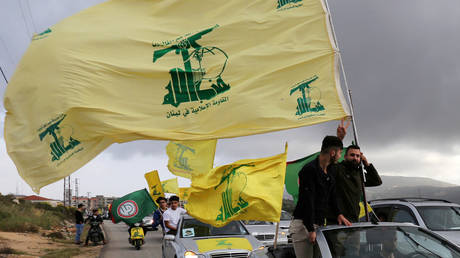 FILE PHOTO: A supporter of Lebanon's Hezbollah gestures as he holds a Hezbollah flag in Marjayoun, Lebanon May 7, 2018. ©  REUTERS/Aziz Taher

France has pushed back against Washington’s assertion that Hezbollah has stockpiles of ammonium nitrate stashed around Europe, stating there’s no indication of such stores existing in its own country.

“To our knowledge, there is nothing tangible to confirm such an allegation in France today,” French Foreign Ministry spokeswoman Agnes von der Muhll said in response to the US State Department’s alarming claim.

The spokeswoman stressed that France would not allow such “illegal activity” on its territory and that it would respond to such actions with “the greatest firmness.”

On Thursday, Nathan Sales, the US State Department’s coordinator for counterterrorism, alleged that Lebanon’s Hezbollah had caches of dangerous chemicals in France, Spain, Italy, and other European states. He said that the chemicals had been smuggled into the country hidden in first-aid kits, but did not provide evidence backing his incendiary accusation. (RT)

As you know, on September 27, Armenia attacked Azerbaijan, and Azerbaijan is conducting counter-offensive operations…

Oil producers on Monday shut offshore production and pulled workers off platforms in the U.S.…