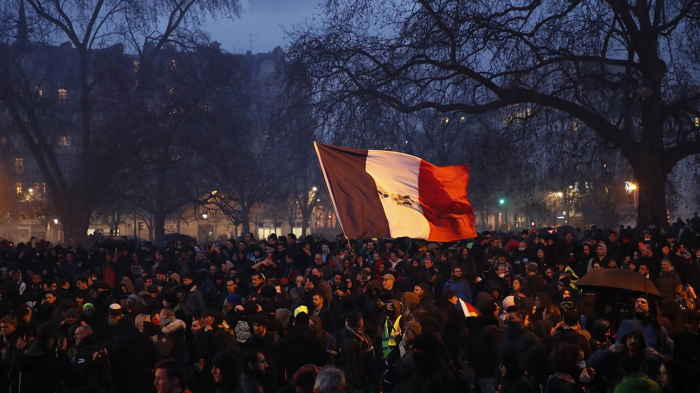 Scores of protestors across industries in France entered their 13th day of protests Tuesday, as opposition to the government’s plan to raise the retirement age to 64 increased.

French President Emmanuel Macron said his administration is moving ahead with a plan to create a single univeral pension system, promising that it will be fairer and benefit women who have taken time off from the workforce and also anyone who currently is receiving a low pension.

Unions could not be placated by these promises, insisting that the already existing system, which allows workers under special pension regimes to retire as early as their 50s, is an example to other countries and would force workers to remain in the workforce for several more years with lower wages.

Several European countries have raised the retirement age or cut pensions in recent years to keep up with increasing life expectancy and slowing economic growth. Macron argues that France needs to do the same.

The plan is just one of many on Macron’s agenda that has threatened the current system, and union workers plan to continue their pushback into the Christmas holidays.

The Eiffel Tower turned away revelers and tourists after staff members walked off the job, and the glitzy landmark sported a “Monument Closed” sign. It is the second time the tourist attraction has been closed due to strikes, which started on Dec. 5.

Commuters in Paris braced through another day of hours-long train delays as train drivers refused to return to work.

People from across the French workforce — Air France staff in uniforms, lawyers wearing long black robes and even opera performers — joined in the strikes and protests in higher numbers than the last cross-sector walkout last week.

Macron’s plan faced another hitch Monday after his appointee to oversee pension reform, Jean-Paul Delevoye, was forced to resign over allegations that he was recieving undeclared private sector payments while he was earning a government salary, creating a potential conflict of interest.

The government plans to replace Delevoye and press on with its reforms.

“Democratic opposition, union opposition is perfectly legitimate,” he told lawmakers. “But we clearly laid out our plans. And on this plan, the creation of a universal retirement system, my determination … is total.”

He also paid tribute to “the French who go to work despite difficulties.”