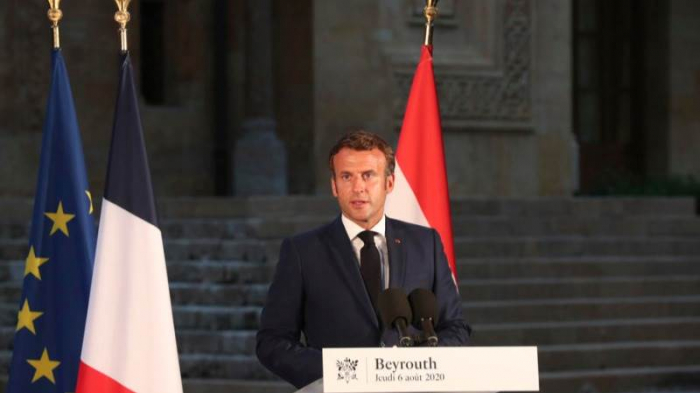 French President Emmanuel Macron Thursday called for an international investigation into the blast at Beirut’s port that killed more than 130 people and ravaged entire neighbourhoods, costing the country billions, according to AFP.

“An international, open and transparent probe is needed to prevent things from remaining hidden and doubt from creeping in,” he told reporters at the end of a snap visit to the Lebanese capital.

In asking for an international enquiry, he joined calls widely supported in and outside Lebanon for an independent probe, and said French investigators were on their way to Beirut.

Even as they counted their dead and cleared streets of debris, many Lebanese were boiling with anger over a blast they see as the most shocking expression yet of their leadership’s incompetence.

Lebanese authorities said the massive explosion was triggered by a fire igniting 2,750 tonnes of ammonium nitrate stored in a warehouse at Beirut’s port.

Read more:   80th anniversary of Adriano Celentano to be held in Baku

But many questions have been raised as to how such a huge cargo of highly explosive material could have been left unsecured for years.

Macron said a French military aircraft carrier was hours away from landing in Beirut with “rescue teams and investigators to take the search and the probe forward”.

Lebanon’s foreign minister had announced on French radio Thursday that an investigating committee had been given four days to determine responsibility for Tuesday’s devastating explosion.

Yet most of the members of this committee are high-ranking officials who command little trust from the people and many relatives of the blast’s victims have been calling for foreign investigators.

The cataclysmic explosion, which left an estimated 300,000 people temporarily homeless and injured around 5,000 people, struck when Lebanon was already battling rampant inflation and rising poverty.

Read more:   "If Armenia initiates some sort of military action, CSTO would not be involved"

The International Monetary Fund has offered help but Lebanon’s political leaders have balked at the measures the monetary institution is requesting for a rescue package to be approved.

To help ease the crisis, an international aid conference for Lebanon would be held “in the coming days,” Macron said.

He stressed that the aid raised during the conference would be chanelled “directly to the people, the relief organisations and the teams that need it on the ground”.

The French president took a tough tone on the reforms he said were the only thing holding back a massive aid package that could put the ailing country back in the saddle.

Speaking of Lebanon’s political leaders, Macron said: “Their responsibility is huge, that of a revamped pact with the Lebanese people in the coming weeks, that of deep change.”