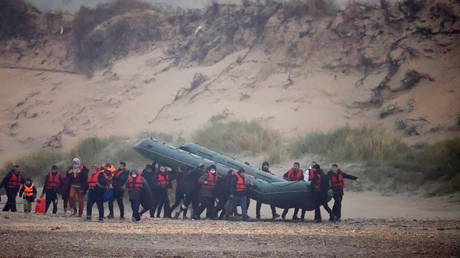 A group of more than 40 migrants prepares to cross the English Channel, near Wimereux, France on November 24, 2021. © Reuters / Gonzalo Fuentes

France will not be held hostage to Britain’s domestic politics over the Channel migrant crisis, the country’s interior minister has said, signaling, however, readiness to negotiate with London.

The remarks were delivered by Interior Minister Gerald Darmanin on Sunday, following a meeting with his Belgian, German and Dutch counterparts in the northern French city of Calais.

“Britain left Europe, but not the world. We need to work seriously on these questions… without being held hostage by domestic British politics,” Darmanin told reporters. (RT)