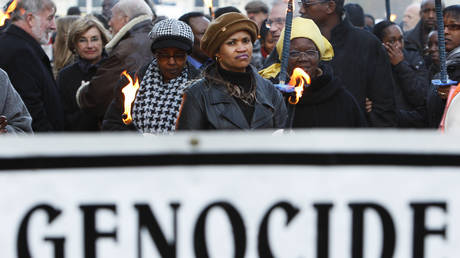 A Rwandan government-commissioned report on the 1994 genocide has accused France of “enabling” the slaughter, going further than a recent French report that held the country responsible but stopped short of judging it complicit.

France holds “significant” responsibility for “enabling a foreseeable genocide,” states the 600-page Rwandan report, which was published on Monday. It documents the role of French authorities prior to, during, and after the massacre, which saw an estimated 800,000 people killed between April and July 1994.

It contends that France “did nothing to stop” the killings, mainly of the ethnic Tutsi minority, and, in the years since, has attempted to distort truths and cover up its role, and even extended protection to perpetrators, drawn from extremists in the majority Hutu population.

Also on rt.com Erdogan fires back at France’s ‘bloody past’ on day of 1st Armenian genocide commemoration

It also accuses former French president François Mitterrand and his administration of supporting, funding, and training the government of then-Rwandan President Juvénal Habyarimana, despite “warning signs,” and being aware of the preparations being made for the slaughter.

“The French government was neither blind nor unconscious about the foreseeable genocide,” opines the new report, which comes less than a month after a French report concluded that France had “heavy and overwhelming responsibilities” but cleared it of complicity in the killings.

“Is France an accomplice to the genocide of the Tutsi? If by this we mean a willingness to join a genocidal operation, nothing in the archives that was examined demonstrates this,” it stated.

Commissioned in 2017, the French report accused the authorities of pursuing their “own interests, in particular, the reinforcement and expansion of France’s power and influence in Africa.” Even at the height of the killings, they “did nothing to stop” the massacres, it said. (RT)