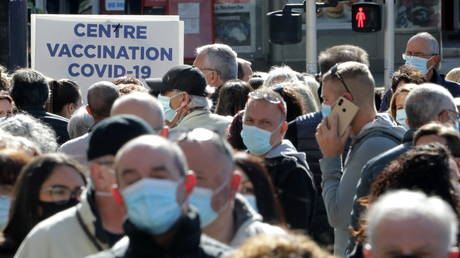 France has become the first country in Europe to embrace a “digital coronavirus travel certificate” system – a controversial electronic vaccine passport similar to those that have surfaced in Israel and parts of the US.

The TousAntiCovid app is slated to debut next Thursday, a year after the concept was devised in Brussels to serve as the root framework for a contact-tracing program and immunity passport for France. Going forward, it will be expanded to include vaccine data as well, with the relevant information stored on users’ smartphones.

During the trial, travelers will be registered as they pass through connection points in Corsica and overseas departements (similar to counties) in France. Paris hopes the design will not just confirm the positive or negative test status of users, but also track their vaccination status.

Starting on April 29, the trial system can be used to verify whether the carrier has been vaccinated or not, an official told Le Monde on Tuesday. The system will subsequently serve as one part of a “reinforced, consolidated, and standardized” pan-European system, according to Minister of Digital Transition Cedric O, who has been in contact with other countries and major airlines in an effort to set up a functional, glitch-free system going forward.

European Commissioner for Justice Didier Reynders referred to the system as a “digital green certificate,” using similar terminology to that used in Israel, and suggested it will be completely operational by June 21st. He expressed the need to get it rolled out as soon as possible, given the economic doldrums that have taken hold of southern France, traditionally a tourist hotspot but currently on ice due to the pandemic. In its current form, pass-holders who take a Covid-19 test will receive a text message they can print or store in their TousAntiCovid app, streamlining the ease of entry to their desired departement
by including their name, the date and type of the vaccine or test they took, and details about the doctor who tested them. The information can be cross-checked with a national database.

Read more:   About 88,000 tons of ammunition stored in military depots burning in Ukraine

The officials involved have deliberately avoided referring to the program as a “vaccine passport,” lest it go down in flames or scare away French people who are disturbed by the idea of a vaccine passport – though it’s not clear what those people are expected to do once confronted with the actual vaccine passport, since there’s little other way to describe it. (RT)