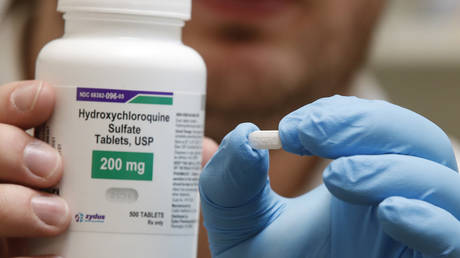 FILE PHOTO A pharmacy tech holds a bottle and a pill of hydroxychloroquine at Rock Canyon Pharmacy in Provo, Utah. © May 20, 2020. George Frey / AFP

France has clamped down on the much-talked about drug that many have taken against Covid-19, including US President Donald Trump. A new study showed that the treatment increases the risk of death from the virus.

The French government has revoked its decree authorizing the prescription of anti-malarial drug hydroxychloroquine (HCQ) for treating Covid-19 patients, with the exception of clinical trials. The decision came after the government’s advisory body, the High Council of Public Health (HCPS), and the National Agency for Medicines and Health Products Safety (ANSM) both gave unfavorable opinions on the drug.

The HCPS recommended against using hydroxychloroquine outside of clinical trials, regardless of whether the patients took the drug alone or in combination with antibiotics. The ANSM, in turn, initiated a procedure to suspend clinical trials involving the use of HCQ “as a precaution.”

The drug has become a buzzword in the media as many place high hopes on finding a cure for the novel coronavirus. HCQ became increasingly popular in France to fight Covid-19 symptoms, as its prescription rate jumped by 7,000 percent in some parts of the country, according to local media. (RT)

South Africa has introduced new restrictions, including another ban on alcohol sales, to help contain…

Russia is upgrading its fleet of Sukhoi Su-25 attack planes to further boost their survivability.…

Another Azerbaijani soldier martyred in Armenian provocation laid to rest

Servicemen of the Azerbaijani Army – non-commissioned officer, sergeant Vugar Sadigov, who was martyred as…

Deaths in Mexico from the coronavirus pandemic rose above 35,000 on Sunday (local time), with…

Starting from the afternoon on July 12, units of the Armenian armed forces, grossly violating…

Russia to cooperate with Azerbaijan on COVID-19 vaccination

“The fight against coronavirus infection is now an international problem, so countries, especially friendly states,…

Azerbaijan Army’s servicemen die in holding off an enemy attack

On July 12, the units of Armenian armed forces attempted an attack using artillery to…