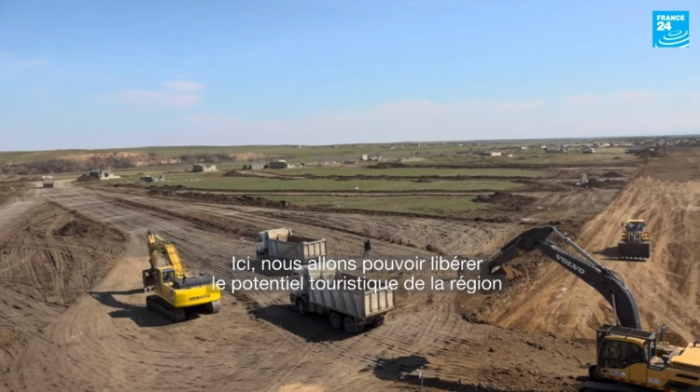 The story highlights the recent trip organized by the Azerbaijani government for dozens of journalists to the territories liberated after the Second Karabakh War. A special correspondent of France 24 in Azerbaijan also joined the trip.

The story notes that dozens of journalists were invited to witness the construction work launched in Fuzuli district, which was liberated from occupation during the Second Karabakh War. The journalists also watched the ongoing demining operations in the liberated Azerbaijani lands.

Madad Mammadov, who is supervising the ongoing demining work, stressed the importance of coverage of mine clearance operations by foreign media. Mammadov also accused Armenia of refusing to provide the map of minefields, which is the main problem that hinders the demining work.

France 24 also shared a video highlighting the ongoing construction of an airport in Fuzuli. It notes that the airport, which is being built upon the instructions of President Ilham Aliyev and planned to be launched by next fall, will make a significant contribution to the tourism and logistic potential of the region.

The story also points out that a highway connecting the airport to other districts is also under construction, which is being conducted by Azerbaijani and Turkish companies. Furthermore, the construction of the shortest highway connecting Fuzuli with the city of Shusha, located in the center of Karabakh, is underway.