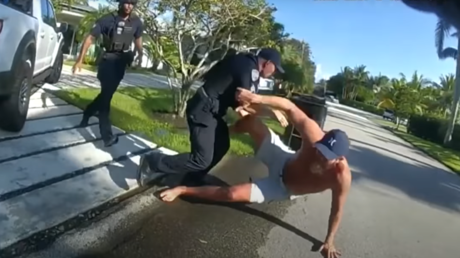 Brad Parscale, who was demoted from his job as President Donald Trump’s campaign manager in July, was suddenly tackled and slammed to the pavement by Fort Lauderdale, Florida, police after his wife said he threatened suicide.

Police body-cam footage released Monday shows Parscale, wearing only a baseball cap and a pair of knee-length shorts, sitting on his porch as officers arrive at his home on Sunday afternoon. Parscale began to walk slowly toward an officer at the end of his driveway, saying, “She’s lying, I’m your friend.”

The officer said, “Alright, relax. What’s going on?” Parscale then set down a beverage can on the sidewall of his pickup and began to quietly explain a dispute with his wife, who had told police that he had a gun and threatened to kill himself. At least two other officers then rushed toward Parscale from behind the pickup with one yelling at him to “get on the ground.” The 6-foot-8 Parscale, still shirtless and holding nothing in his hands, then began to turn toward the officer who was speaking, only to be grabbed by the knee, lifted up and thrown onto his back in the street.

Parscale’s wife, Candice Parscale, reportedly called police from a neighbor’s house and said he was armed and had locked himself in his home. Police said they negotiated over the phone for Parscale to come out. (RT)