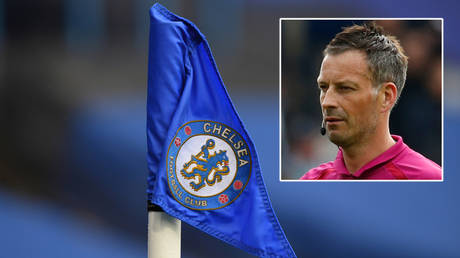 An ex-Premier League ref says that racism allegations made against him by Chelsea’s Juan Mata and John Obi Mikel came close to ruining his life, as he claims midfielder Mikel threatened to “break his legs”.

Mark Clattenburg detailed the incident from a fiery clash against Manchester United in 2012, in which he says several Chelsea players exploded into rage after he allowed a questionable late goal from Javier Hernandez to clinch a 3-2 win for the Red Devils.

The 2016 Champions League final referee also issued red cards to Chelsea pair Branislav Ivanovic and Fernando Torres, prompting a chorus of abuse from the Stamford Bridge faithful and the players themselves.

But elaborating on the clash for the first time in his autobiography ‘Whistle Blower’, Clattenburg wrote of how the incident “almost ruined his life” and said Nigerian player Mikel barged into his dressing room after the game and tried to attack him.

“I knew to expect a tirade of abuse from Chelsea supporters, but I was not beating myself up over my performance. It was then that I heard a commotion outside the dressing-room door,” Clattenburg wrote, per MailOnline.

“Before I get to the door it swings open, and with some force. John Obi Mikel bursts in and I can see the rage in his eyes.

“Chelsea manager Roberto Di Matteo and coach Eddie Newton are holding him back. Mikel is out of control; he’s trying to get at me. ‘I’m gonna break your legs!’ he shouts. He’s swinging for me.”

Clattenburg also explains that there was no truth to the racism allegations made against him by the club which dominated the UK sports press at the time, and that the first he heard of them was when he read about them in the media. That, he says, made him fully aware of the power that Premier League clubs can have in controlling a narrative.

“I have to be clear here – and this is extremely important – at this point there had been no mention of racism to me, either from Mikel or Di Matteo. No-one had made any accusation of that nature,” he wrote.

“I left Stamford Bridge in the people-carrier and, as we made our way out of West London towards Heathrow, there’s a social-media notification on the screen of my phone saying: ‘BREAKING NEWS: CHELSEA ACCUSE REFEREE MARK CLATTENBURG OF RACIST COMMENTS’.

“During those early hours overnight on the Sunday of the game, I realized the power of football clubs, the hold they have over the media. It was terrifying. It was the European champions against a referee – who would you believe?

“I am trapped. This could ruin my career. It could ruin my life. The fear is worse than going to prison. I am being called a racist. That is a real life-sentence, you don’t come back from that. Guilty until proven innocent, that is the English way.”

Chelsea withdrew the racism allegations concerning Juan Mata two days afterwards but the club refused to follow suit with the similar allegations the club made regarding Mikel, prompting an official FA investigation.

He appeared before multiple panels throughout the next several weeks before the charges were dropped and he was found not guilty.

Clattenburg refereed 297 Premier League games until his retirement in 2017, and claims in his book that mental health concerns were the primary reason – something he says is prevalent amongst his peers. (RT)