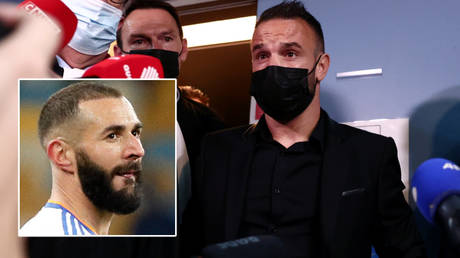 Real Madrid star Karim Benzema, who could face five years in jail for complicity in blackmail over a sex tape found on a phone, was absent as a court heard him talk about his ex-teammate in a call that had been tapped by police.

The case now being heard in a three-day trial stretches back to 2015, when the two players at its center – Benzema and Mathieu Valbuena – were based at a France national team camp together.

Earlier that year, Valbuena, now 37 and plying his trade at Olympiacos in Greece, asked Axel Angot, who was playing for Olympique Marseille, to upload his mobile phone’s contents to a new device.

Angot allegedly found sexually explicit material there, and he and fellow defendant Mustapha Zouaoui have since been accused of attempting to blackmail Valbuena by threatening to go public with a sex tape.

The court hearing for the “sextape case” begins today! Karim Benzema and 4 other men are on trial for the alleged blackmail of Mathieu Valbuena. According to French TV, the Real Madrid striker will be absent from court, but will be represented by his lawyers. 👀 pic.twitter.com/pgCacRzyyS

Zouaoui has admitted to reporters that he shared the tape, but stressed that were never any attempts to extort money from the player.

Valbuena has also described another defendant, Younes Houass, approaching him, who himself told the court that the winger was acting if everything was OK.

Houass claims he warned him of how serious the issue was, but also didn’t ask for money.

Read more:   Qarabag's legionnaire not to play for a long time

Once Valbuena went to the police, a sting operation was allegedly set up with an undercover agent appointed the task of acting as an intermediary.

Benzema is accused of entering the fray when another defendant, Karim Zenati, a childhood friend who described him in court as a “brother” and was once on the striker’s payroll, allegedly had him act as a middleman.

In October 2015, Benzema approached Valbuena at the national team’s training camp which triggered a scandal that rocked French football.

Breaking | President of the Tribunal plays a police wire tap of a conversation between Karim Benzema & Karim Zenati from just after Benzema met with Valbuena.Benzema: “I saw him.”Zenati: “And?”Benzema: “He’s not taking us seriously.”Zenati: “So he’s not going to budge?”

“Be careful. These are very, very heavy criminals,” he is alleged to have told his former teammate, before later saying to Zenati in a phone call police recorded which was played to the court: “He’s not taking us seriously.”

Benzema was eventually rumbled, becoming exiled from the Bleus fold and missing their World Cup victory in Russia in 2018 over the scandal before returning to Didier Deschamps’ squad at Euro 2020.

Valbuena has never donned the famous blue jersey again either. Some six years later, Benzema was absent from the trial.

In his opening statement, Valbuena spoke of his fears at the time and how he had never considered parting with money to prevent being blackmailed.

“I was afraid for my sporting career, for the France national team,” RMC reported him as saying in their account of proceedings, via GFFN.

Karim Benzema in the recorded conversation with Zenati from 6th October 2015 cont:“I said to Valbuena: if you want the video destroyed, go see my friend. No police, no lawyers. [Djibril] Cissé had the same thing (a sextape of him). He paid.”

“I knew that if the video came out, it would be complicated for me in the France national team. I felt in danger – my first instinct was to file a complaint

“There was never talk of a sum of money, but there was a threat from people who told me that they had something on me,” he added.

Valbuena claimed he knew after their meeting at the training camp that Benzema “was part of the affair”. “I felt like he wanted to make me scared,” he said.

“Benzema is not here. It’s a pity, but that’s the way it is. I’ll go all the way to the end to put it all behind me.”

Speaking on his behalf, Benzema’s lawyer said Benzema had not attended because he had been in Ukraine for his goalscoring appearance in Real Madrid’s 5-0 Champions League win at Shakhtar Donetsk.

“Now he is preparing to play in Barcelona [on Sunday],” he explained. “These are not the conditions within which you attend a three-day trial. If the tribunal had found our excuse to be not valid, they would have told us – but that is not the case.

🗣 Sylvain Cormier, Benzema’s lawyer speaks after today’s hearing: “Benzema is flying over current world football. So I think there is a form of jealousy expressed today from Valbuena.” pic.twitter.com/BT5YBwwB8z

“Our view is simple. For us, this affair is being made out to be a mountain. We are over-interpreting certain phrases that our client might have said on the phone to a friend.

“All he wanted to do was simply defend his team-mate, to offer help to Karim Zenati in total discretion and now… without being able to imagine what would come of it.

“We saw the prosecutor, well briefed, who repeated like a robot the same phrases. Honestly, to come and say that there could have been financial compensation on Mr Benzema’s part is ridiculous.

“Mr Valbuena speaks with resentment. His calculation is simple: ‘I was excluded from the squad, never returned to the French national team, from a footballing perspective I was not chosen, and in contrast Karim Benzema is at the top of world football.’ It is a type of jealousy.”

Benzema is accused of complicity in attempted blackmail and has denied any wrongdoing. In addition to the five-year jail term, the Ballon d’Or nominee also faces a fine of around $87,000. (RT)