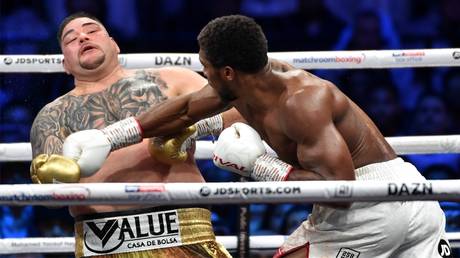 Andy Ruiz Jr. might be calling for a trilogy fight, but there really is only one fight that matters in heavyweight boxing now, and that’s Anthony Joshua against the winner of Deontay Wilder vs Tyson Fury 2.

Unfortunately, the “Clash in the Desert” wasn’t really much of a clash at all. Indeed, it seems that, unfortunately, it may have been scuppered by Andy Ruiz’s “Clash with Dessert”. Why else would the man who so brilliantly shocked the boxing world by stopping Joshua earlier this year come into the biggest fight of his career so out of shape and so off the pace?

Also on rt.com ‘I had a sombrero on’: Andy Ruiz explains HUGE weight difference ahead of Anthony Joshua rematch

There’s an old phrase from legendary former middleweight world champ Marvin Hagler that applies here: “It’s tough to get out of bed to do roadwork at 5am when you’ve been sleeping in silk pajamas.” And it seems Ruiz may have enjoyed the trappings of being the heavyweight champion of the world just a little too much.

He came in overweight and underprepared and it showed as a wary, but not-at-all-worried, Joshua simply stuck and moved his way to a landslide unanimous decision victory. We scored the fight round-by-round, and gave Ruiz just one round – the eighth. And, to be honest, that only went his way because Joshua deviated from his gameplan for three minutes. Other than that, the Brit was never in any serious trouble.

And even though Ruiz shouted into Joshua’s post-fight interview with Sky Sports to call for a trilogy fight, there really isn’t any call for one outside of Ruiz’s own camp.

The first fight was a real “Buster” Douglas moment. But normal service was resumed in the rematch, and the fight wasn’t remotely close. If the newly-crowned heavyweight champion of the world can’t get himself properly prepared for his first title defense against the guy he beat to win the belts, then he really doesn’t deserve another fight.

And I suspect promoter Eddie Hearn knows this, too. The rematch had a “what if?” angle to it. But he knows a trilogy fight will simply be nothing more than a time-marker, and a payday, for his man. But Joshua wants to unify the titles, and that means going after the one major heavyweight belt not currently in his possession – the WBC title currently held by Deontay Wilder.

Wilder looks set to face off against Tyson Fury in a huge rematch in February next year, and that timeline should suit Joshua perfectly. He can enjoy his Christmas, get back in the gym in January and be fully sharp and ready to go for a summer blockbuster with the winner of the Wilder-Fury rematch. (RT)