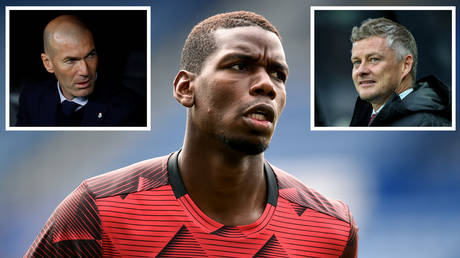 Paul Pogba’s Man United status enjoyed as big a turnaround as the club’s fortunes last season, battling injury to go from unfavoured luxury to midfield lynchpin. Now he must stay at Old Trafford to repay his boss’ trust in him.

The 2019/20 English Premier League was a funny old affair: a three-month break due to the outbreak of Covid-19, football played in empty stadiums, Liverpool winning a Premier League, VAR becoming the simultaneous sworn enemy and best friend of almost every club from week to week, and Paul Pogba being a productive part of Manchester United’s midfield.

Of all the surprises and setbacks suffered in the most intriguing and obscure season in the postwar era, perhaps the last of those was the most unforeseen and unlikely. Trust and patience from his manager Ole Gunnar Solskjaer has paid dividends, and now it’s Pogba’s turn to repay his manager and stay at the club to find his form an delivery success.

Manchester United rode the crest of a wave of results, confidence, and most importantly, positivity to clinch third spot on the last day of the 2019/20 season after hitting a purple patch in the season’s final stretch which saw them record a 14-game unbeaten streak in the league since a disastrous home defeat to Burnley in January.

With a 2-0 final day of the season win against rivals Leicester City, United and Pogba celebrated the return of elite European football after exceeding the expectations of even the most optimistic supporters to finish a place above a strong Chelsea team and fire themselves into next season’s Champions League after a season-long exile. 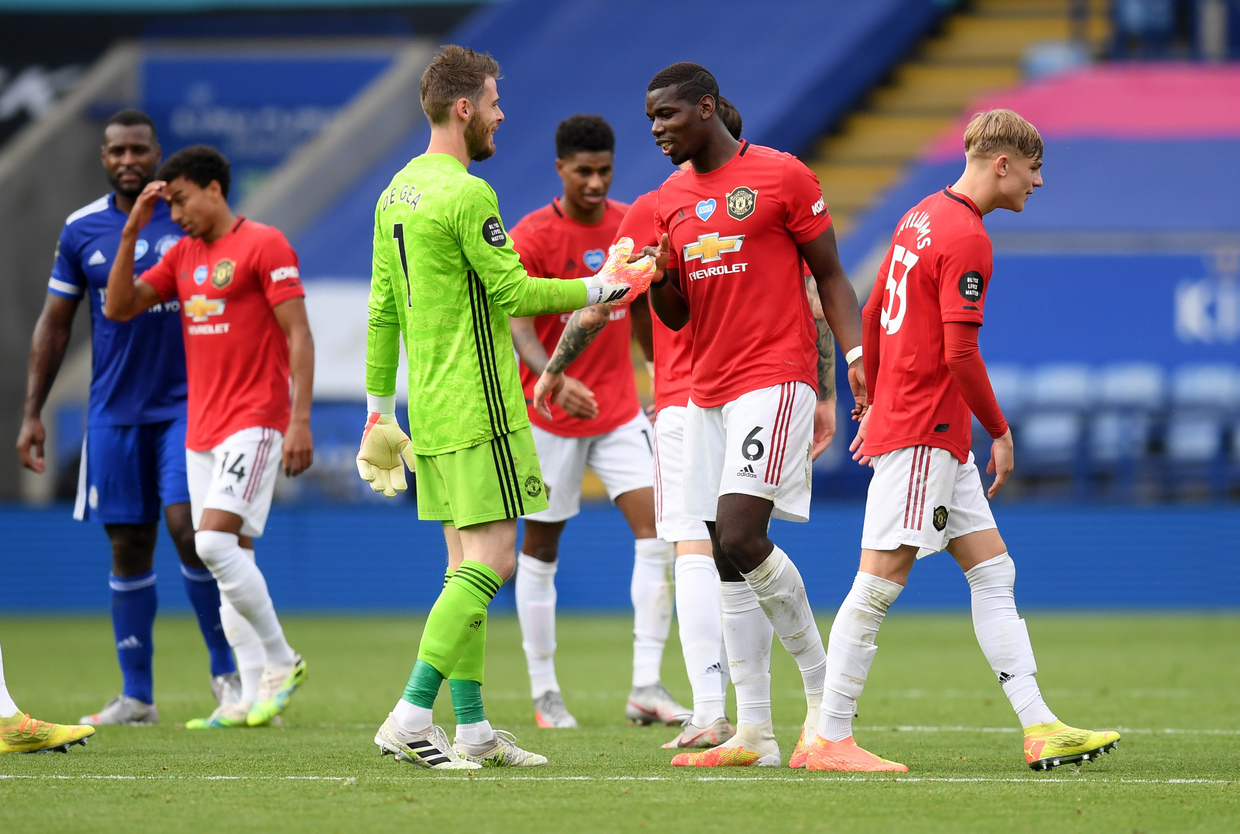 The final day of the 2018/19 season painted a very different picture. After an embarrassing final day home loss to already-relegated Cardiff City, Pogba was mercilessly heckled by an irate portion of supporters who singled out the Parisian playmaker as the scapegoat for United’s stagnation.

That loss to Carfiff capped off an abjectly disappointing season in which United finished sixth despite having the second-most expensive squad in the Premier League, £89 million ($115 million) of which being accounted for by Pogba’s lacklustre midfield presence. Pogba had failed to follow up his all-conquering summer at the Russia 2018 World Cup with success at club level, and fans saw their sub-par record-signing, however rightly or wrongly, as the root of their woes on the pitch, despite him ending the term as their top scorer with 13 goals.

The 2019/20 season began in much the same vein for Pogba. An ankle injury in late August would hamper his season start and rear its head twice more over the course of the season to put him out of action for six months in total. His time sidelined was spent flooding his social media accounts with sunkissed training sessions in Dubai, which did nothing to thaw the icy relationship with fans who accused him of being more interested in self-promotion than any sort of team effort.

His March recovery coincided with football being postponed due to the outbreak of the coronavirus, but the enforced hiatus couldn’t have come at a better time for the 27-year-old.

The arrival of Bruno Fernandes from Sporting Lisbon in the January window, and the Portuguese midfielder’s record of scoring or providing for 15 goals in his first 14 games, could have signalled the end for the Frenchman’s chances in United’s customary central midfield three, especially with the form of stalwart Nemanja Matic, academy starlet Scott McTominay and Brazilian Fred.

Instead, Bruno’s scintillating form and the consequent heaps of plaudits allowed a man who enjoys a perennial spotlight whether on the pitch or on his myriad social media sites to settle into a more anonymous midfield role after the Premier League restarted in June.

Free from the burden of expectation brought on by his de facto dual position as United’s sole leader and creator, Pogba was been afforded less scrutiny from fans, and has enjoyed a more relaxed role in the middle of the park being able to distribute, although not dictate and dominate, more freely from midfield. 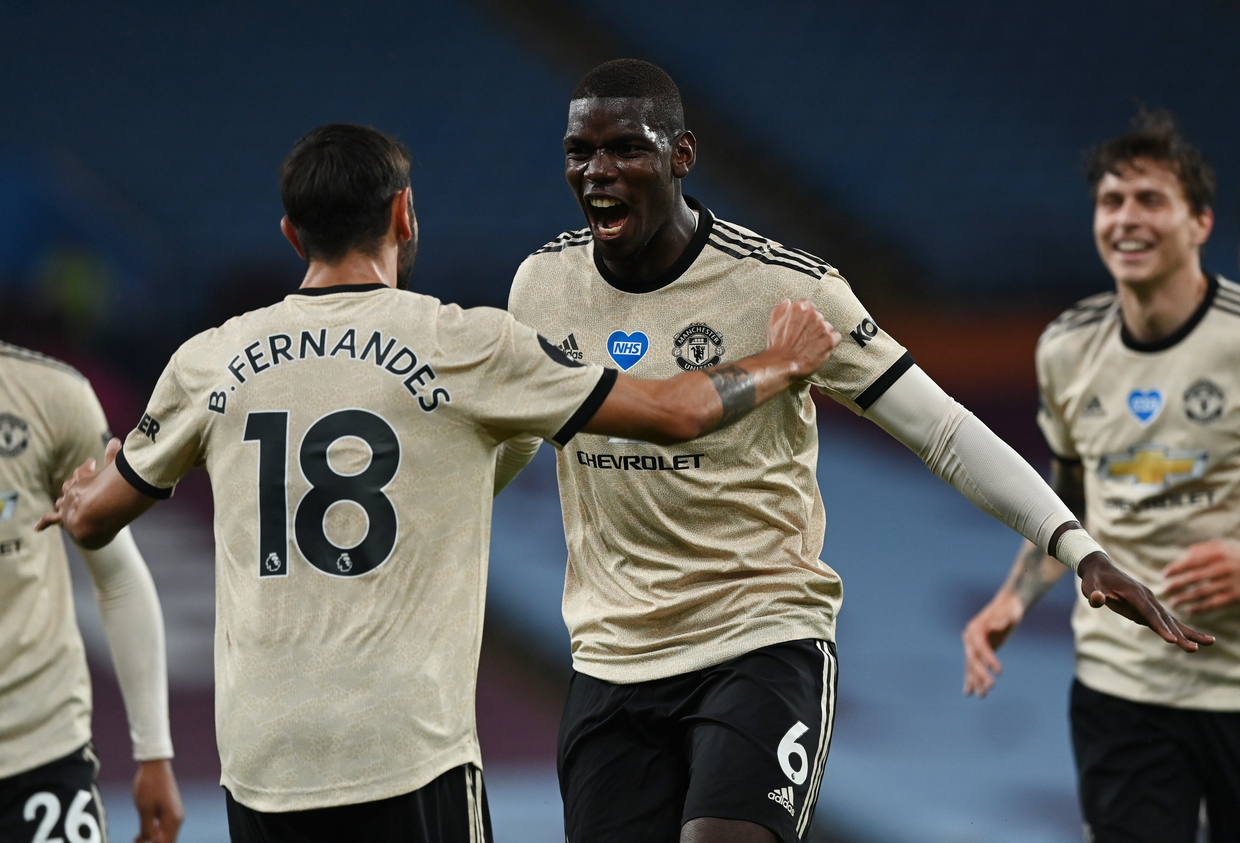 In his nine games after the restart until the end of the season, Pogba notched his first and goal of the campaign in perhaps United’s best post-pandemic pause performance – a 3-0 win away to Aston Villa – and provided two assists. Despite not signalling world-beating records in any league, it signified the building of momentum as Pogba had until then registered a mere two assists in a season fractured by injury.

Ultimately, United are playing attractive, entertaining football, and Pogba’s inclusion in the side is now enhancing rather than hampering the flow of play of a team seemingly on a roll. Consequently, the mood has been lifted at a football club which of late has desperately detested itself and has been fractured by deep underlying conflicts between players, coaches and fans alike.

Of them, Pogba’s battles with Solskjaer’s successor Jose Mourinho were well documented in the Portuguese coach’s tenure in the United hot seat which ended in December 2018.

Pogba was a casualty of the biggest downside of Mourinho’s appointment a media circus of Fleet Street’s rags and red tops which flocked to Manchester to pick the bones of Mourinho’s every move, which seemed to consist of clashing with his captain.

What Solskjaer offers Pogba in the absence of Mourinho’s experience, is an understanding of an enigma to which few have the patience to attempt to understand. The two have a relationship stretching back to when the Norwegian rookie cut his managerial teeth coaching the Manchester United reserves for the period when Pogba was making his transition from youth team standout to the cusp of the first team.

Rightly considered world class on his day, but also lethargic and temperamental when not, Pogba has split opinion on the terraces far more often than he has split defences with a pinpoint pass, but Solskjaer’s belief in Pogba’s potential has been unwavering.

His endorsement of United’s number 6 being a “good lad” didn’t so much fall on deaf ears as raise eyebrows when rumours of Pogba’s ‘poisonous’ character spread through the press, and the now-manager has on more than one occasion reiterated that his presence is a huge part of United’s future plans. 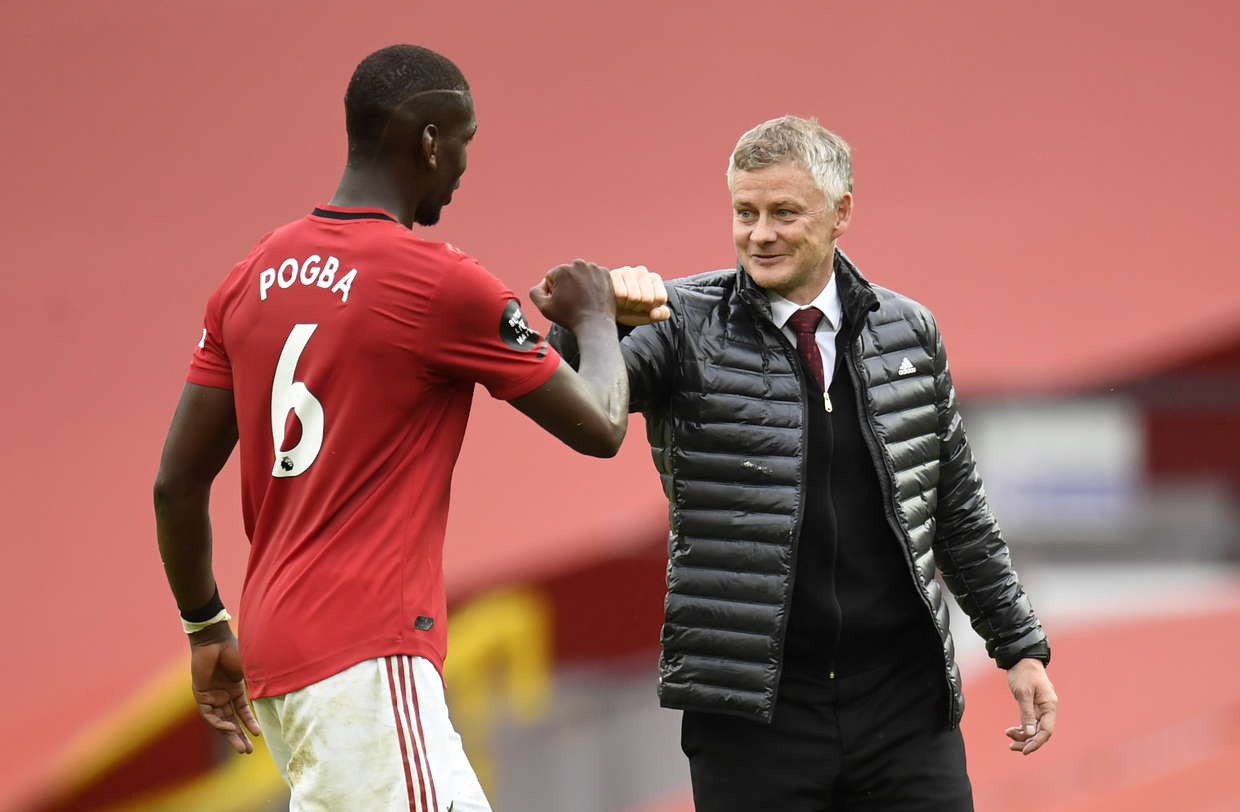 Real Madrid may come knocking and try to tempt United to part with a player who has long flirted with an England exit. Zinedine Zidane is a long-time admirer of his fellow countryman and has echoed Solskjaer’s wishes by making it clear that the most welcome edition to the Bernabeu midfield would be Pogba, who has hardly ever firmly denied his interest in a move to Spain.

For a long time that looked like the best option for both United and Pogba, but under Solskjaer there is a different horizon, and now the time has come for the player to repay the 47-year-old’s trust by staying at Manchester United and staying focussed on the task at hand, which is to legitimately challenge for trophies. After missing out on cup glory with two lost domestic semi-finals this season, that journey should start with the restart of the Europa League this week. 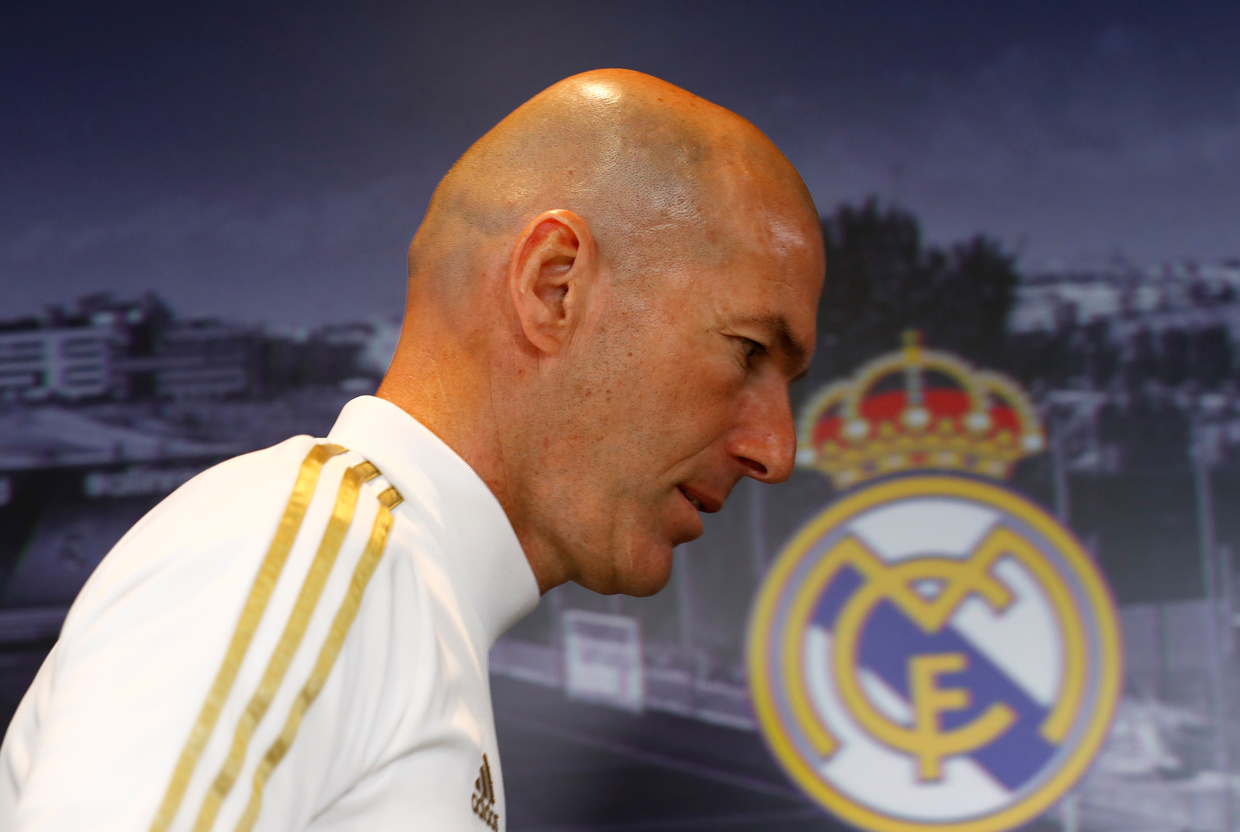 Solskjaer is now far from simply a fan-favourite shoe-horned into the manager’s role as a short-term replacement, and has gained the respect and confidence of a United squad he is carefully crafting into a team likely to kick on from the progress made last term, and his ability to get the best from ailing strikers Marcus Rashford and Anthony Martial, as well as the blooding of 18-year-old academy product Mason Greenwood to establish a United attacking front three, has been arguably his best achievement as manager so far.

For both the club and Pogba, Champions League football next season provides the perfect stage to prove they belong among European football’s elite, and to kick on from many forlorn seasons of big spending and little returns on the pitch.

The saying goes that ‘when the going gets tough, the tough get going’, but having survived the toughest times at United, Pogba would be foolish to get going anywhere now the going is good

Also on rt.com ‘Put your medals on the table!’ Liverpool legend challenges Pogba after player says he ‘didn’t know him,’ but how do they compare?