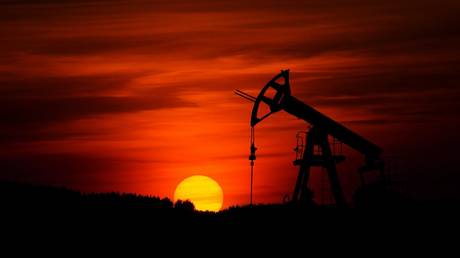 Call options give traders the right—but not the obligation—to buy assets at a certain price, the so-called strike price, by a certain date.

The amounts of call options at triple-digit strikes have soared in recent weeks, suggesting that more speculative traders are attracted by potential quick profits from options trades, which are relatively low-cost ways to speculate on the direction of an asset.

Also on rt.com A cold winter could send oil prices soaring past $100

For example, at the end of September, call options at Brent at $200 a barrel for December 2022 traded 1,300 times in one day, amid a worsening energy crunch in Europe and Asia ahead of the winter heating season in the northern hemisphere.

In WTI, the number of outstanding call options with $100 per barrel strike price with different expiry dates has surged five times since early February 2021 to more than 141,000 contracts as of the middle of October, according to data from CME quoted by the Journal.

Other popular call options for WTI included strikes at $95 or $180, QuikStrike data reported by the Journal showed.

“I haven’t seen crazy strikes like this in a long time,” Mark Benigno, co-director of energy trading at StoneX Group, told the WSJ.

These call options are speculative and mostly used by traders to bet on the direction of an underlying asset.

Yet, the resurgent activity with bets on $100 or $200 oil shows that more traders are getting into the energy market amid the global gas and coal crunch, and more of those speculators are bullish on oil prices. Moreover, the “crazy” strikes and their growing number are bound to increase the volatility in the oil market in the coming weeks and months, traders tell the Journal.

Still, $100 oil is no longer an outrageous bet, as it was at the start of this year.

As of early Monday, Brent was above $85, and WTI traded at over $83, for the highest prices since 2018 and 2014, respectively. Analysts and industry professionals do not rule out $100 oil, especially if the winter turns out colder than usual.

Oil prices could hit $100 in case of a colder winter, some analysts and investment banks have said in recent weeks.

Surging natural gas prices, a cold winter, and reopening of international airline travel could push oil prices to $100 per barrel, Bank of America said in early October. But $100 oil could also trigger the next global economic crisis due to the high inflationary pressure, the bank noted.

Recovering global oil demand could send oil to $100 a barrel at some point at the end of 2022, despite Covid challenges to demand this coming winter, according to one of the world’s largest independent oil traders, Trafigura. (RT)