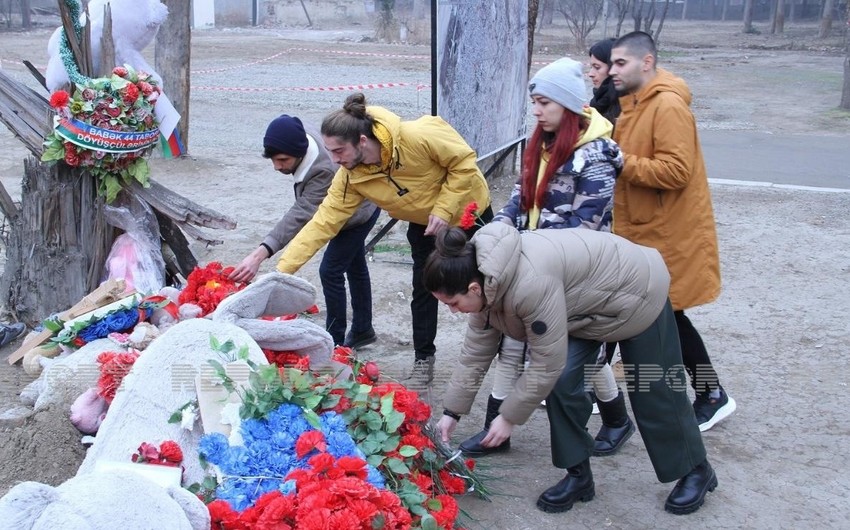 Within the framework of the project “Patriotic War through the eyes of photographers” funded by the Youth Foundation of the Republic of Azerbaijan, local and foreign photographers have gotten acquainted with the crimes committed by Armenian rocket attacks against innocent civilians in Ganja, Report informs.

The visitors laid flowers at the site of the bloody terrorist attack and paid tribute to the memory of the killed civilians.

The visitors were informed that the Armenian Armed Forces violated the norms and principles of international law, the 1949 Geneva Conventions and their additional protocols, as well as the requirements of the humanitarian ceasefire agreement, reached during the meeting in Moscow at their insistence. Armenia fired heavy artillery at settlements, deliberately targeting the civilian population. As a result of rocket attacks on the city of Ganja, 26 civilians, including women and children, were killed. Six out of them were children. As many as 142 people were injured in the shelling.

It was noted that the attack on densely populated areas at night with Tochka-U, Smerch, Scud and other missiles was aimed at killing a large number of civilians. Although the deliberate targeting of civilians is a crime against humanity, Armenia has continued its war crimes in defiance of international law.

High inflation in Azerbaijan is mainly due to its import into the country, Deputy Minister…

The European Union (EU), within the framework of sanctions against Russia in connection with the…

Two children, who are citizens of Azerbaijan and were kept in an Iraqi prison, were…