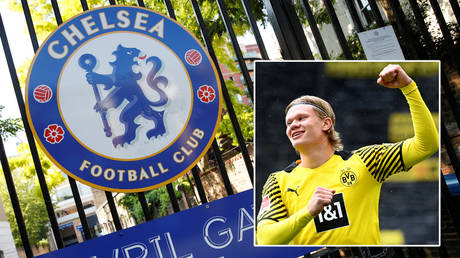 Norway wonderkid Erling Haaland, who is currently at German giants Borussia Dortmund and wanted by a string of top European clubs, is interested in a move to Champions League winners Chelsea, according to a report in England.

Chelsea are said to want to land hotshot Haaland this summer but are open to reaching an agreement for the start of the 2022/23 campaign if the Bundesliga contenders are keen to keep him for another year.

The 20-year-old is sufficiently hellbent on a switch to Stamford Bridge that he is willing to wait until next summer if necessary, The Telegraph has claimed.

Haaland is also fancied by Barcelona, with outlets including Spanish publication Sport saying that the striker, who scored 41 goals last season, has a release clause of around $91 million that will be activated in 2022, although his German employers have vehemently denied that suggestion.

Chelsea are pursuing a possible move for Erling Haaland but know they may need to pay over £150m for him, according to The Telegraph 🔵 pic.twitter.com/mJdhPHooTj

Of all the clubs interested in Haaland, Chelsea boast arguably the strongest relationship with Dortmund after a successful deal in January 2019 that set up American star Christian Pulisic’s switch to west London.

The British newspaper earlier reported that Chelsea’s interest in Haaland has never waned despite Dortmund insisting he is not for sale.

It is unclear whether BVB would open to such an arrangement, perhaps exchanging Haaland for striker Tammy Abraham as part of the deal in a bid to repeat the success that England prospects such as Jude Bellingham and Jadon Sancho have enjoyed with them.

Re: Erling Haaland Chelsea working intense to get Erling Haaland. He is seen as the “missing” player to make them challenge for the PL-title next season.Fee very high, but confidence that this can be solved.The main obstacle could be the wage-structure at Chelsea

Chelsea could opt for another striker, although their options beyond Romelu Lukaku, who was a flop during his previous period at the club and pledged his loyalty to Italian champions Inter Milan last week, are reportedly limited.

Chelsea are one of the few clubs that can afford Haaland’s current price tag – said to be in the region of $212 million – in the current market along with Champions League final opponents Manchester City and their city rivals, Manchester United.

City might opt for wantaway Harry Kane if Spurs chief Daniel Levy proves reluctant to sell the England captain to the likes of Chelsea, who have a bitter rivalry with Tottenham.

Real Madrid are also thought to be hopeful that Haaland will stay at the Westfalenstadion, allowing them to potentially take advantage of any release clause next summer. (RT)

“We, from the city of Chorum, are sending our love and respect to our Azerbaijani…