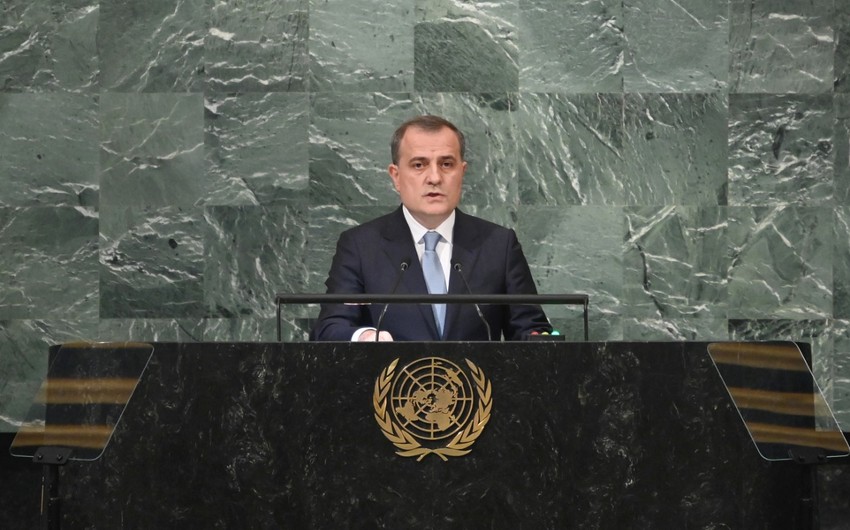 Azerbaijan has now embarked upon unprecedented recovery and reconstruction activities in the liberated territories and prioritized their full reintegration, Azerbaijani Foreign Minister Jeyhun Bayramov said during his speech at the General Debate of the 77th session of the UN General Assembly in New York, Report informs.

The minister stressed that such activities aim at finally enabling hundreds of thousands of IDPs to return to their homes in safety and dignity, and ensure peaceful life in conflict-affected territories. The first families have recently returned to the Aghali village in the liberated Zangilan district of Azerbaijan.

“Azerbaijan is resolute to re-integrate its citizens of Armenian origin residing in conflict-affected territories into its political, social, economic space, guaranteeing the same rights and freedoms with all the citizens of Azerbaijan regardless of their ethnic, religious or any other affiliation. The Constitution of the Republic of Azerbaijan provides the solid legal framework in this regard.

One of the major impediments to the ongoing recovery and reconstruction efforts and safe return of displaced persons is a massive contamination of liberated territories by landmines and other explosive devices, and continued refusal by Armenia to provide accurate and complete information on mined areas. Over the years of occupation of and during withdrawal of its forces from Azerbaijani territories Armenia heavily and indiscriminately contaminated those areas with mines and other explosive hazards. Since the signing of Trilateral Statement more than 240 Azerbaijani civilians and military were killed or seriously injured by mine explosions,” Jeyhun Bayramov stressed.