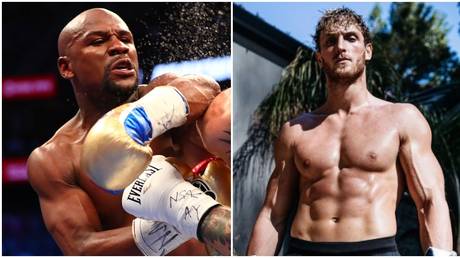 Floyd Mayweather versus Logan Paul appears to be back on, with tentative plans in place for the boxing icon to face the YouTube celebrity on June 5, according to reports.

Former five-weight world champion Mayweather and boxing novice Paul were originally slated to meet in February, although the bout fell through amid reports of a lack of interest and difficulties getting a deal over the line.

But in the wake of Logan Paul’s brother Jake purportedly racking up more than 1 million pay-per-views for his KO victory against former MMA fighter Ben Askren last weekend, interest seems to have been rekindled in Mayweather stepping into the ring with the elder of the Paul siblings.

According to The Athletic, an exhibition bout is “tentatively” being planned for June 5 at an as-yet unnamed location.

“The exhibition will be carried by Showtime PPV and is planned for June 5. Mayweather can’t weigh more than 160 pounds; Paul 190,” wrote reporter Mike Coppinger.

Intriguingly, that date would place the contest in direct competition with the lightweight world title fight between Teofimo Lopez and George Kambosos, which is set for Miami and is being hosted by US entertainment platform Triller.

Triller won the purse bid for that fight with a staggering bid in excess of $6 million.

Should Mayweather and Paul meet on the same day, the new fad for celebrity exhibition bouts would be tested against a genuine boxing blockbuster.

Fans were split on the idea, with some claiming the star power of undefeated ring legend Mayweather would carry the day.

If this ends up actually falling under the same date, there’s some ppl who are going to learn a valuable lesson on how big the Mayweather name still is.

Rip to the Teofimo Lopez ppv on the same night

Others, though, claimed the bout was “utter stupidity” and symptomatic of the “farcical state” that boxing was descending into.

Why is no one talking about the utter stupidly of this, and the farcical state that boxing is descing into?

The fight already fell thru once cause no one gave a shit, people still don’t.If fights in US they’d have to wear headgear and still may not even be allowed.Lots of hurdles still. 6 weeks away and no venue. It’s not happening. Just floyd desperate to keep his name alive

lol. When has Floyd Mayweather weighed 160lbs for a fight ever, to then require a weight restriction that would STILL have him 30lbs smaller than Paul?Makes no sense

There were also suggestions that Mayweather was attempting to steal Lopez’s thunder, with Mayweather protegee Gervonta Davis a potential challenger to the young American star further down the line.

Mayweather don’t want teofimo Lopez to have them big numbers. Then Lopez will be the A side versus tank Davis 🤷♂️

Mayweather appears to have teased potential locations for his fight in recent days, suggesting on Instagram this week that five cities were under consideration as hosts: Las Vegas, Los Angeles, Miami, Dallas and Atlanta.

Mayweather, 44, has continued to pursue a lucrative sideline in exhibition bouts, having seen off Japanese kickboxer Tenshin Nasukawa on New Year’s Eve 2018, pocketing a reported $9 million for less than one round’s world.

Although an official boxing contest, Mayweather’s showdown with Irish MMA megastar Conor McGregor in the summer of 2017 arguably falls into the same category.

His fight with Paul – should it come to fruition – will further test the appetite for celebrity contests, potentially opening the floodgates for more such events if it trumps the Lopez-Kambosos showdown.

On paper it is hopeless mismatch, with Paul, 26, losing his only official venture into the ring when he was defeated by split decision against British fellow YouTuber KSI in November of 2019.

Mayweather, 44, boasts a 50-0 record and is estimated to have amassed career earnings of more than $1 billion.

Speaking in March, Mayweather suggested he and Paul were in line to net more than $100 million for their showdown.

“Look up how many followers Logan Paul has on social media,” Mayweather said of his rival, who has a following of 19 million on Instagram and 22.9 million subscribers on YouTube.

“Me and Logan Paul or a YouTuber can go out and make nine figures.” (RT)