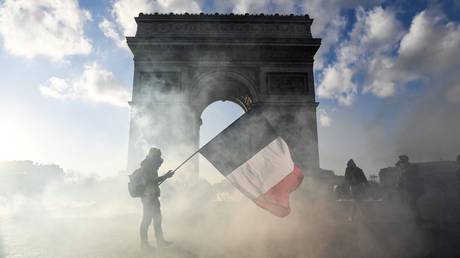 As the ‘Yellow Vests’ protests in France come full circle, some vow to keep fighting for a more just society, while others believe the movement has gone too far. Though rattled, the system they rose up against is still in power.

Every Saturday for a year now, tens of thousands of people all over France have taken to the streets, fed up with not just the neoliberal and austerity policies of President Emmanuel Macron, but apparently the entire political system of the Fifth Republic.

The government has gone after them in force, pushing the police to their breaking point. The mainstream media has demonized them as anti-Semites, homophobes, far-right. Nevertheless, the ‘Yellow Vests’ (Gillets Jaunes) have persisted.

How it all began

A Frenchman marching through the streets of Paris, Lyon, Nice, Marseille, Dijon or any other city this Saturday might recall the very first protest, on November 17, 2018, with 300,000 across the country wearing the government-mandated safety vests as a protest symbol against that very government.

While it is unclear which particular pebble started this avalanche, the general consensus points to that summer’s new speed limit of 80 km/h, ostensibly enacted to cut carbon emissions and fight climate change. That was followed by an “eco-tax.” Whether or not those had the ulterior motive of replenishing the empty French treasury, the people were having none of it.

Trucker Eric Drouet and businesswoman Priscillia Ludosky circulated a petition against the tax in October, which quickly snowballed. Then a resident of Brittany named Jacline Mouraud posted a video on Facebook that went viral. Someone called for a street protest. There has been one every Saturday, ever since.

‘Repression is out in the open now’

Here and there, the protests turned violent. Rocks were thrown at the police. By week two, someone had vandalized the Arc de Triomphe in Paris and set cars on fire. Police responded as they do to riots in the banlieues – suburbs where many of France’s immigrants live in public housing: with overwhelming force.

This kind of repression has been around for a long time, Yellow Vest activist turned journalist Maxime Nicolle tells RT France. Now it’s out in the open, for all the world to see. 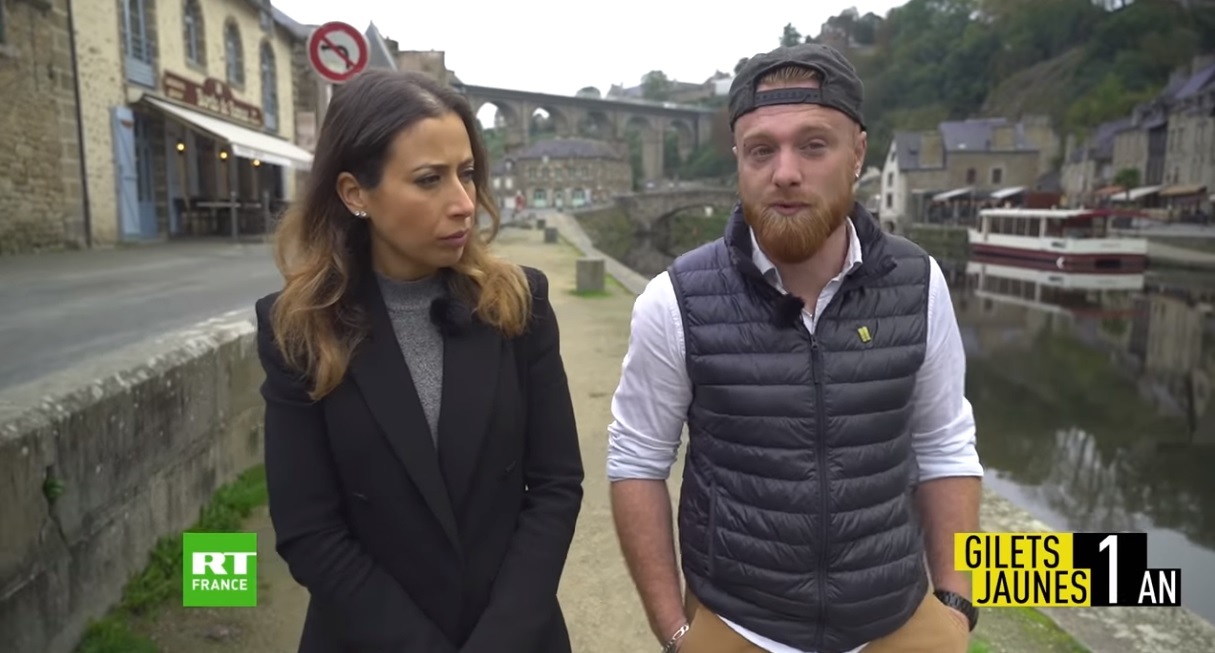 Exact numbers are difficult to come by, but French media estimate that over 10,000 people have been detained over the past year. Some 3,000 have been prosecuted and over 400 sentenced to jail time. The carnage on the street has been real as well: 11 people have died over the course of the protests, and over 500 were injured. Of those, 23 lost an eye to “flash-balls,” non-lethal police rounds that maim nonetheless.

Perhaps the most famous among them is Jérôme Rodrigues, a plumber who believes the police deliberately targeted him that January day. Wearing a prosthetic eye, Rodrigues tells RT France he struggles with anger issues and fears for his safety, but if he could turn back time, he would do it all over again.

The 32-year-old Nicolle, also known as “Fly Rider,” lives in Dinan, Bretagne. His eyes light up with anger when he talks about his compatriots reduced to poverty in their twilight years and his generation sleeping in their cars because they can’t afford the rent and taxes. Meanwhile, he says, the elites are “eating caviar, drinking €500 bottles of wine, living in pretty Paris apartments.”

He rejects the argument that France’s national debt is 98 percent of its GDP and that there is simply no money for social services. Nicolle points out the government takes out loans from private banks, then has to pay steep interest. Why not nationalize the banks, he wonders.

Hundreds of kilometers away, in Paris, the one-eyed Rodrigues argues the same thing. He describes the debt as “numbers in a computer,” and scoffs that somehow there is always money for the wealthy, yet never any for the common man. Corporations have their subsidies and tax havens, yet the working poor have to pay the tax to clean up their pollution. What gives? 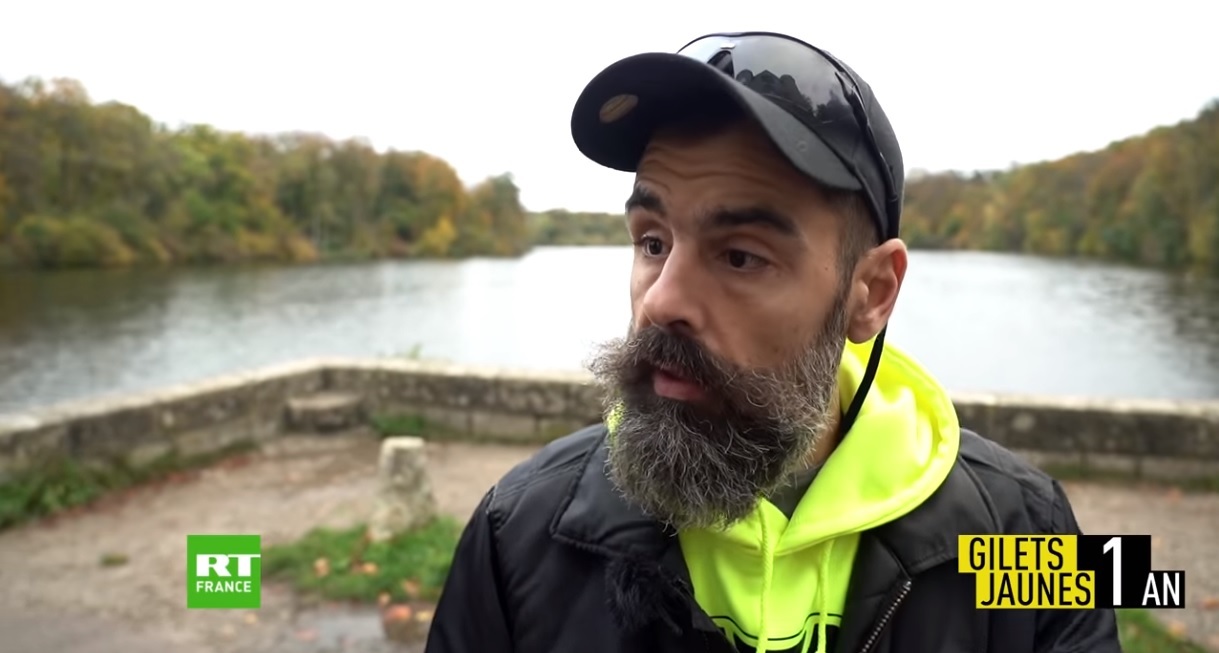 “Today, if you make €1,500 [a month] in France, you can’t afford rent, you have to sleep in your car. That’s not normal. A working person has the right to live decently,” says Rodrigues.”It’s an upside-down world.”

In separate interviews, both Rodrigues and Nicolle argue that the system itself is unjust, as it thinks nothing of humanity, only of ones and zeroes on the balance sheets. The institutions that were supposed to serve the people have failed, and perhaps it’s time to create new ones. Could the Fifth Republic, around since 1968, be on its last legs?

That’s precisely what almost happened within the first month of the Yellow Vests protest, according to one Elysee Palace guard. A member of the security detail (CRS) told RT France this week that the handful of them could not have resisted the 3,000 or so protesters for long.

“If we had been attacked, where I was, we could not have held: the Elysee would fall. In retrospect, it’s really scary,”said the man, who gave his name as Stéphane.

Read more:   Ambassador: Azerbaijan did not grudge its support in the struggle against FETÖ terrorist organization

The Yellow Vests did not attack. Macron’s presidency survived. Although the French president has since pledged some €17 billion in tax relief, one-time bonuses and subsidies, he remains determined to reject their demands for systemic reforms. While the protesters never quite numbered the original 300,000, they still turn out every Saturday.

Protests have taken their toll on the police, too, with the rising number of suicides prompting a protest march of their own back in October. The thin blue line is still holding, for now, but it cannot stretch forever.

Parallel to the police repression, the government has implemented a media one. The Yellow Vests were accused of anti-Semitism, homophobia, Islamophobia, xenophobia, racism – just about every possible issue considered beyond the pale in modern liberal discourse.

Nicolle says it was an attempt to label the movement and put it into a box, which failed. People who took a moment to think saw that there was nothing to it and that the Yellow Vests were not an instrument of any political party, whether on the far right or the far left. The smears did have a negative effect, however, fracturing the movement and sending some members running.

One of them is Jacline Mouraud, the author of the Facebook video that helped kick-start the protests. She lives in Morbihan, Bretagne and still champions the movement’s social and economic justice values – but says they lost her when the Arc de Triomphe was vandalized in December, and “black bloc” anarchists were allowed to torch cars and loot stores in March.