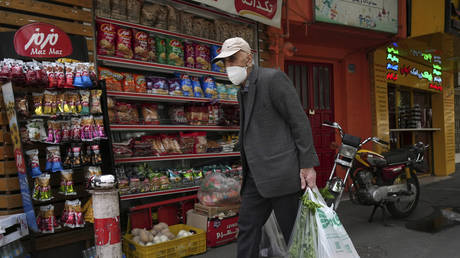 Protests sweeping Iran over surging food prices have left five people dead, according to media reports. Officials in Tehran have provided no confirmation of potential casualties.

The unrest follows the government’s decision to cut food import subsidies, as part of an austerity package unveiled by President Ebrahim Raisi earlier this week. The measures are aimed at rescuing an economy battered by sanctions, and also soaring inflation, which has been aggravated by the Ukraine conflict.

The scrapping of subsidies has resulted in dramatic – up to 300% – increases in prices of everyday goods, such as cooking oil, chicken, eggs and milk.

Iran’s government has pledged to protect low-income citizens from the inflationary shock with monthly cash hand-outs, but the situation has left consumers struggling to buy basic items, with long lines appearing in front of food stores across the country.

Anti-government rallies have swept through Iranian cities including Dorud, Farsan, Jooneghan, Borujerd, Cholicheh, Dehdasht and Ardebil. Some gatherings descended into chaos, with stores set on fire.

On Sunday, the London-based Iran International TV station, citing unconfirmed social media posts, said that since Friday five people have been killed during the protests, with an unverified video on Twitter apparently showing the moment one of them was shot. (RT)