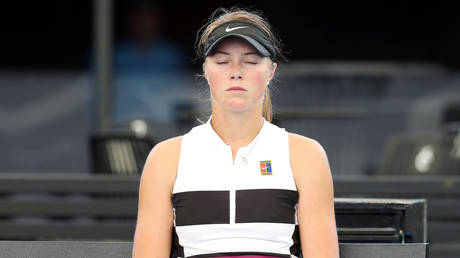 Olivia Gadecki of among the vaccine-related absences. © Getty Images

A string of tennis players will miss the first tennis Grand Slam of 2022 for vaccine-related reasons Olivia Gadecki of among the vaccine-related absences. © Getty Images

Novak Djokovic has been made a pariah for arriving Down Under unvaccinated. Here, we list five other players who will also be missing from Melbourne Park over the next fortnight in reasons related to the jab.

A two-time Australian Open quarterfinalist at the competition, the American didn’t even apply for a medical exemption for this year’s showpiece and said he wouldn’t have met any of the criteria either.

Making his feelings known, world number 96 Sandgren has voiced outrage over Djokovic’s visa saga on Twitter and said that Australia “doesn’t deserve to host a Grand Slam” due to the debacle.

“They are now retroactively detaining players who they previously let into the country with medical exemptions,” he remarked after the unvaccinated Renata Voracova was taken in for questioning by Australian Border Force officers before being booted out of the country.

“This isn’t about the rules, This is pure authoritarian politics,” added the unvaccinated star.

They are now retroactively detaining players who they previously let into the country with medical exemptionsThis isn’t about the rulesThis is pure authoritarian politics https://t.co/4TVY4TgPSQ

The Frenchman is out due reasons partly related to the mandate and stated: “Personally, I am not vaccinated and the trip to Australia was not an option for me.

“It is certain that from the moment when I could not go there without being vaccinated, it necessarily complicated things.

“And there is not only Australia. Today, there is the United States, Austria… It is a rather complex topic,” the 30-year-old ranked number 8 in men’s doubles admitted.

“On the other hand, it is a personal choice not to get the vaccine,” he stressed, while his partner Nicolas Mahut, who he won the men’s doubles title with at the Australian Open in 2019 has backed him.

“I respect his decision. I didn’t make that choice, I got vaccinated very early on, but I totally understand. It’s a very personal choice,” said Mahut.

The only Australian on this list, Gadecki made headlines for becoming the first unranked teenager to beat a Top 10 player in 24 years when she toppled former 2020 Australian Open champion Sofia Kenin in the second round of the Phillip Island Trophy on Valentine’s Day last year. (RT)