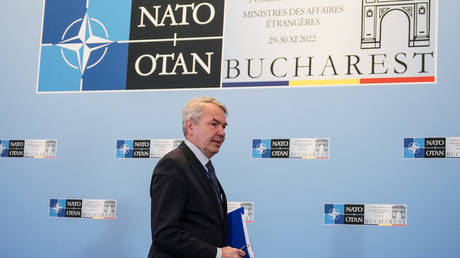 Helsinki’s bid to join the US-led military bloc is still pending ratification by all members of the alliance Finland’s Foreign Minister Pekka Haavisto arrives for a meeting of NATO Foreign Ministers on November 29, 2022 in Bucharest, Romania. © Andrei PUNGOVSCHI / AFP

The Finnish government has submitted a bill on NATO membership for parliamentary approval. As Helsinki took another step to become a fully-fledged member of the US-led bloc, Foreign Minister Pekka Haavisto insisted that the country had not asked NATO to station nuclear weapons on its territory.

Commenting on the government’s move at a press conference, Haavisto described it as “a historic moment.” “I guess everyone was shaking a little inside,” he added, referring to the extraordinary cabinet meeting on the matter.

The proposal asks lawmakers to approve, among other things, The North Atlantic Treaty, which serves as a legal framework for NATO. It also outlines key consequences of membership for Finland, including its future commitment to deliver on Article 5, a clause stipulating that an attack on one member is an attack on the entire bloc.

The initiative also says that NATO membership “would not be a problem for Finland’s sovereignty and participation in international cooperation,” adding that it “would not constitute a significant transfer of competence to an international organization.”

Finland may become a fully-fledged NATO member only after all 30 bloc members ratify its bid, with Hungary and Türkiye’s ruling on the matter still pending. However, parliament still has the legal authority to process the government’s proposal. 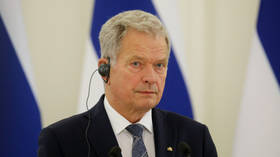 Haavisto also commented on the potential deployment of NATO’s nuclear arsenal on Finnish territory. The minister noted that the atomic weapons are “under strict control” of Washington. “We do not know whether it has the slightest interest in spreading them elsewhere apart from the existing bases,” the official said.

“We are not asking for them and no one is offering them to us,” he stressed.

His statement comes after last month Finnish President Sauli Niinisto said that while Finland does define restrictions on its NATO membership, it does not intend to station nuclear weapons on its territory if it becomes part of the alliance.

Finland, along with its Nordic neighbor Sweden, submitted applications to join the military bloc in May amid Russia’s military operation in Ukraine, breaking with decades-long neutrality.

Last week, Russian Foreign Minister Sergey Lavrov said that Moscow does not need the security architecture that Western countries are trying to build without Russia and Belarus. He also noted that European security is “being fully submissive to the US,” adding that instead of working towards collective security in Europe, the West is “digging dividing lines.” (RT)