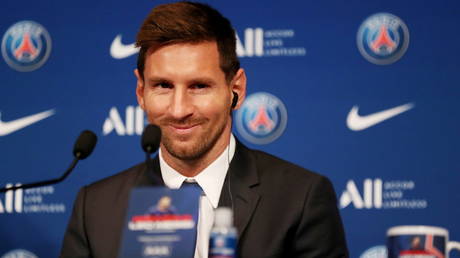 A financial disclosure of Lionel Messi’s near $137 million three-year deal with Paris Saint-Germain has raised further questions about the French powerhouse’s financial clout in the transfer market.

Six-time Ballon d’Or winner Messi ended his two-decade association with boyhood club Barcelona this summer, partly due to the Catalan club’s dire financial state which meant that they couldn’t offer an extension to the man cited as their best-ever player without falling foul of La Liga’s financial fair play rules.

European powerhouses Paris Saint-Germain subsequently swooped to complete the signing of the free agent, and according to a financial disclosure of the deal that Messi signed with his new club from L’Equipe, it is perhaps easy to see why Barcelona were unable to compete with the deep pockets of Paris.

The French publication calims Messi will earn the same pay packet as another of their global stars, Neymar, while the Argentina icon’s deal eclipses that of Kylian Mbappe – a man perennially linked by the tabloids to Spanish giants Real Madrid.

According to ‘leaked’ documents, L’Equipe says that Messi will earn an incredible £94 million ($129 million) should he see out his three-year deal with PSG. He is set to earn £25.6 million ($31 million) in his debut campaign with the club, a sum which will increase to £34.1 million ($47 million) in his final two contracted seasons. He will be 37 when his current deal expires.

The salary is understood to be similar to what Messi would have earned at Barcelona had they had been on a solid financial footing, and around half of his previous contract at the Camp Nou.

Messi is also understood to have negotiated a loyalty bonus of around £12.8 million ($17.5 million) for each of the three years he is contracted to the French team.

And in news that will no doubt make his bank manager a happy man, Messi has also partnered with cryptocurrency website crypto.com in a deal that will also next him a sum in excess of £25 million ($34.5 million) per season.

PSG, who are owned by the megabucks Qatar Sports Investments group, also opened their checkbook on several other occasions in recent months to secure the services of a further galaxy of stars including Sergio Ramos, Georginio Wijnaldum, Gianluigi Donnarumma, Achraf Hakimi and Nuno Mendes – and while three of those were free transfers, their spree has raised further questions as to the Parisians’ financial dominance.

So-called Financial Fair Play guidelines were introduced in 2009 to help safeguard the game against a distorting of the transfer market by Europe’s richest and most elite clubs, mandating that teams spend within their means and keep their transfer and salary fees in line with income.

PSG, though, have been accused of taking advantage of a softening of these rules throughout the Covid-19 pandemic that has allowed club owners to pump their own funds into their teams to help overcome financial losses.

This proved a significant boost to the likes of PSG and Manchester City – but not for fan-funded Barcelona, a reason considered by some as crucial in Messi’s departure from Spain.

A club’s finances have long been a crucial factor in their competitiveness on the pitch, but if there is one takeaway as football emerges from its Covid-19 slumber it is that the rich are very much getting richer – something which is glaringly true in the case of Lionel Messi. (RT)