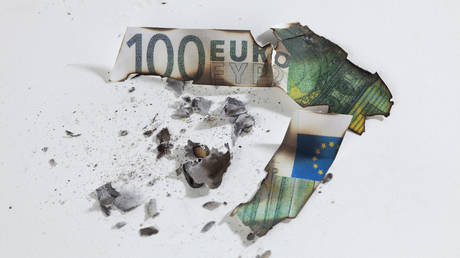 The euro area is at risk of a financial meltdown on the same scale as the crisis it suffered a decade ago, Citi analysts have told CNBC. They cited Germany’s massive energy relief plan as the major threat to the bloc’s stability, the media outlet reports on Friday.

According to the report, Wall Street bank analysts have raised concerns about the violent bond market moves and the European governments’ plans to borrow vast sums of money.

They said that German Chancellor Olaf Scholz’s relief package, worth €200 billion ($195 billion) and aimed at tackling soaring energy prices, “may soften the coming recession but also poses risks.” Those risks relate to the question of how the package will be financed and what that could do to inflation, to Germany’s sovereign bond yields, to the European Central Bank’s benchmark rate, and to the borrowing plans of other euro nations that may do the same.

“The risk is that others may follow that example,” Christian Schulz, deputy chief European economist at Citi, told CNBC, citing the UK’s recent bond market meltdown after unfunded tax cuts by the government.

Schulz explained that Germany could “afford” any debt financing thanks to its low debt-to-GDP ratio and lower external funding needs, but the package could open the door for less fiscally prudent countries to want to borrow large amounts and issue new debt. That could potentially lead to trouble like that seen in Britain.

Citi analysts forecast that German debt financing could force tighter ECB policy, which could then also send yields surging in the euro area. “The risk is that this same dynamic [as seen in Britain] evolves on the continent as well now,” Schulz warned.

Meanwhile, data by Saxo Bank show that an ECB stress indicator for the Eurozone’s financial system – which looks at tensions in bond, equity and money markets – has risen from below 0.1 at the start of the year to almost 0.5 so far. During the Eurozone debt crisis in 2009-2010, the index exceeded 0.6.