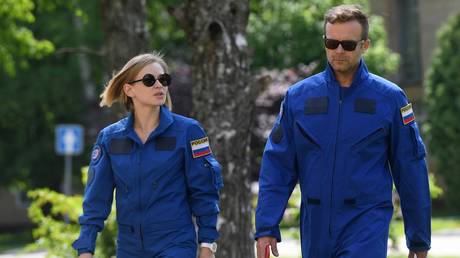 A Russian film crew that will fly on the Soyuz MS-19 spacecraft to the International Space Station next month has begun training in the country’s Far East. A director and actor plan to shoot the first feature film made in space.

According to Roscosmos, the Russian Space Agency, director Klim Shippenko and actress Yulia Peresild have started work with spaceship commander Anton Shkaplerov, a trained cosmonaut at the Baikonur Cosmodrome, the largest operational space launch facility in the world. Initially built in the USSR as the base of the Soviet space program, it is now leased by Russia from the Kazakh government.

They will then return on the Soyuz MS-18 spacecraft in October with cosmonaut Oleg Novitsky, who has been on the manned satellite since April.

“Under the supervision of specialists from Roscosmos…they tried on Sokol KV-2 flight suits, tested them for tightness, and took their seats in the Soyuz MS-19 spacecraft,” a statement from the company said. (RT)