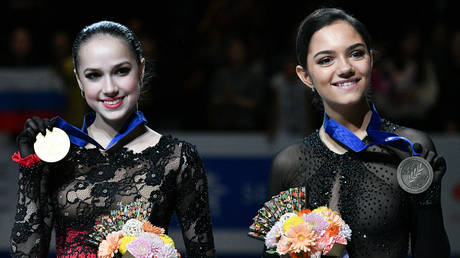 Two of figure skating’s brightest stars, Alina Zagitova and Evgenia Medvedeva, are set to captain rival camps at an inaugural team competition which is scheduled to take place in Moscow in the beginning of February.

The “Channel One Cup” is aimed at giving skaters much-needed competitive experience after the vast majority of international tournaments were canceled due to the pandemic.

Participants will be drawn into two groups shortly before the event, with the ceremony broadcast live by Russia’s Channel One.

Along with three male and three female skaters, each team will also include three ice-dancing duets and two pairs who will deliver short and free programs. The team with the highest sum number of points will be declared the winner.

“It’s a great honor to be appointed a team captain for such a prestigious tournament,” Olympic champion Zagitova said, predicting that the cup would “delight” fans and give its stars the chance to show off their “skill and talent.”

“Figure skating is an individual sport,” Medvedeva was quoted as saying. “That’s why this kind of format, where the team result is more important than your personal achievement, is very interesting.

“To be more exact, this is a competition where your own victory will contribute to team success.”

The two stars will not compete against each other, guiding members of their respective teams who will be randomly selected by draw.

The event will run from February 5 to 7 with spectators being allowed to attend the spectacular battle.

Ilham Aliyev: Azerbaijan has always supported Pakistan on all issues, including Kashmir

“First of all, I would like to express my gratitude to brotherly Pakistan for the…

Ministry addresses those refusing to get COVID-19 vaccine

13:39 ‘Stay the course’ WHO urges amid rise in virus cases