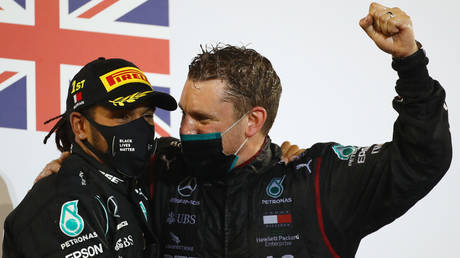 Formula 1 world champion Lewis Hamilton will miss this weekend’s Sakhir Grand Prix in Bahrain after testing positive for coronavirus, just days after the skeptic over vaccine funding had shared a podium with some of his rivals.

Runaway standings leader Hamilton’s remarkable run of 265 consecutive race starts, stretching back to his Formula 1 debut in 2007, will end on Sunday after he entered self-isolation as a result of two positive tests following his victory at the same circuit in the Bahrain Grand Prix on Sunday.

Mercedes announced that a replacement for their superstar would be revealed imminently, with many fans joking that the chances of a rare victory for teammate Valtteri Bottas, who is trailing Hamilton by a chasmic 131 points and has won only two races all season, had been enhanced.

Others worried that Hamilton had been dangerously close to rivals Max Verstappen and Alexander Albon as they took the plaudits for sealing the top three spots at the weekend.

Hamilton got covid, albon and verstappen on podium pic.twitter.com/Xp4QftbaxZ

Hamilton was quite close to Verstappen and Albon on that podium pic.twitter.com/U9EyduY2os

“Hamilton was quite close to Verstappen and Albon on that podium,” pointed out one, while another jibed: “Finally, it pays off for Bottas to never be too close to Hamilton.”

Speculation mounted around how Hamilton had been infected. “If he hasn’t left Bahrain, he got either got it there, from his team, or came in with it undetected and possibly infected his side of the garage,” said one supporter. “Bigger fallout than just Lewis, surely?”

Sergio Perez, who became the first driver to test positive before Lance Stroll followed suit earlier this season, was rumored to have caught the disease from a chef in Europe ahead of his withdrawal from the British Grand Prix in August.

Finally it pays off for Bottas to never be too close to Hamilton.

“it is my time now…” pic.twitter.com/5b3cmXiS2K

Hamilton was involved in a public row earlier this year when he shared an Instagram post that appeared to call Microsoft magnate Bill Gates a liar over his support of vaccines.

Gates spoke about baseless conspiracy theories that vaccines are a way of microchipping people in the clip, which Hamilton later deleted on his platform which has more than 21 million followers.

The Briton claimed he had not seen a comment attached to the video, emphasized his “respect” for the businessman’s charity work and said he had “no doubt” that a vaccine would be “important in the fight against coronavirus”, although he voiced concerns about potential side effects and funding.

Gosh what a strange time for Lewis to test positive. In the middle of a double header, who else is exposed? Yikes

I know, they had built a bubble around him to avoid this but I guess after winning the championship they let their guard down! 🤷♂️

“Apart from mild symptoms, he is otherwise fit and well,” Mercedes said in their statement. “The entire team sends him our very best wishes for a swift recovery.”

Hamilton’s success streak includes 48 consecutive race, points and classified finishes, but he will now have to return a negative test to returning to action, which could rule him out of the final race of the season in Abu Dhabi on December 13.

The 35-year-old will also be unable to match the record of 13 race wins in a season, set by Michael Schumacher in 2004.

Fans anxious that the race was in jeopardy as a result of the news were reassured by reminders that Perez’s diagnosis did not result in any further positive results before the subsequent showpiece went ahead.

“As much as I love Hamilton, it will be really good to see everyone else get a chance at [winning a place on the] podium this week,” said one. (RT)