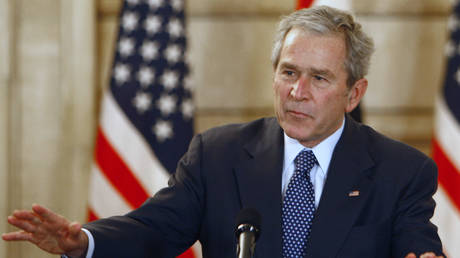 The man planned to smuggle ISIS operatives into the US to kill the former president, the FBI claims FILE PHOTO. © AP / Thaier al-Sudani

An Iraqi citizen residing in the United States has been charged in a scheme to murder former President George W. Bush. He is accused of planning to help members of Islamic State (IS, formerly ISIS) terrorist group enter the country and assassinate the ex-president.

An FBI terrorism task force arrested Shihab Ahmed Shihab Shihab, 52, on Tuesday for “aiding and abetting a plot to murder former United States President George W. Bush,” among other charges, according to the US Department of Justice.

Shihab allegedly traveled to Dallas, Texas earlier this year to surveil Bush’s home, and accepted tens of thousands of dollars in late 2021 to help smuggle IS members into the country through the southern border while working with confidential FBI sources. (RT)