The FBI and US Department of Homeland Security (DHS) claim that they’ve received threats of bombings, violence, and “civil war,” after federal agents raided the Florida home of Donald Trump. Supporters of the former president say the search was politically motivated.

The FBI and DHS “have identified multiple articulated threats and calls for the targeted killing of judicial, law enforcement, and government officials associated with the Palm Beach search,” the agencies warned in a bulletin to federal and local law enforcement as reported by multiple US outlets on Sunday.

The bulletin stated that federal agents have “observed an increase in violent threats posted on social media against federal officials and facilities,” including “a threat to place a so-called dirty bomb in front of FBI Headquarters and issuing general calls for ‘civil war’ and ‘armed rebellion’.”

“Many of these threats include references to the perception that the 2020 Presidential election was fraudulent and other claims of government overreach,” the bulletin continued, adding that these claims “have mobilized [Domestic Violent Extremists] in the past.” 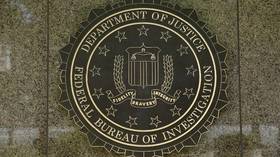 According to the bulletin, federal judge Bruce Reinhart has also been the subject of violent threats. Reinhart, formerly a lawyer who represented employees of deceased pedophile Jeffrey Epstein, approved a warrant for the FBI to search Trump’s Mar-a-Lago residence in Palm Beach, Florida last Monday. (RT)