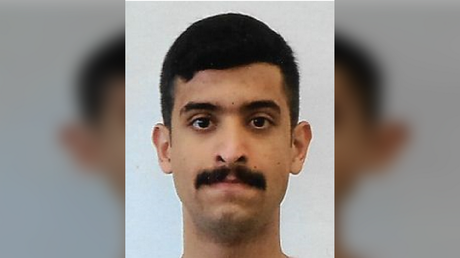 The FBI has released a photo of the Saudi gunman who killed three people at a US naval base in Florida on Friday, formally identifying him as a Mohammed Alshamrani and asking public for tip-offs about his “activities.”

“The NAS Pensacola shooter is identified as Saudi national Mohammed Alshamrani,” the FBI field office in Jacksonville said in a statement on Twitter, accompanying it with a photo of the attacker, that has widely circulated on social media.

The NAS Pensacola shooter is identified as Saudi national Mohammed Alshamrani. Anyone with information regarding his activites is encouraged to call 1-800-CALL-FBI. FBI Jacksonville is not aware of any credible threat toward the Pensacola community at this time. pic.twitter.com/RNc8ZL89WS

The Navy also released the names of three sailors, whose lives were claimed by the gunman as he went on shooting rampage inside one of the classrooms. All three killed sailors were students of the Naval Aviation Schools Command.

#UPDATE: #USNavy releases names of the Sailors Killed in @NASPCOLA Shooting. “We feel the loss profoundly and grieve with the family and friends of the deceased.” – Capt. Tim Kinsella, CO, NAS Pensacola https://t.co/mhqmUBehI7pic.twitter.com/tQuSGtf3Wh

The Navy said that the victims, identified as Ensign Joshua Kaleb Watson, 23, Airman Mohammed Sameh Haitham, 19, and Airman Apprentice Cameron Scott Walters, 21, attempted to neutralize the shooter, noting that “if not for their actions, and the actions of the Naval Security Force that were the first responders on the scene, this incident could have been much worse.”

“When confronted, they didn’t run from danger; they ran towards it and saved lives.”

The FBI, that has been leading investigation into incident, said earlier that its Joint Task Force had was involved in the process, but fell short of labelling the carnage a terrorist attack. “The shooter’s motivation is still being determined,” the FBI said Saturday.

While the US government keeps mum about what could have possibly triggered the vicious attack, a manifesto, attributed to the shooter by a private extremist activity monitor, has been making the rounds on social media. The manifesto eviscerates the US foreign policy, taking aim specifically at the US military interventions around the globe, while accusing Washington of waging a “war of attrition” on Muslims. (RT)