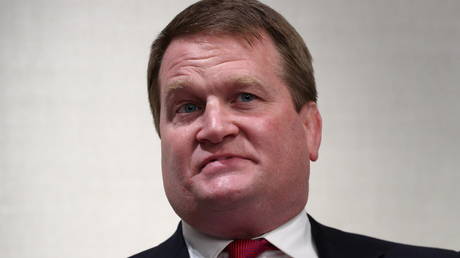 Tony Bobulinski is shown speaking to reporters Thursday about his business dealings in China with the Biden family. © Reuters / Tom Brenner

The FBI has asked to interview investor Tony Bobulinski, the ex-business partner of Hunter Biden who alleged Thursday that Joe Biden was involved in his son’s overseas deals, contrary to the presidential candidate’s statements.

The Senate Homeland Security Committee announced the request, saying the interview that Bobulinski had scheduled with the committee for Friday would be postponed so he could instead meet with the FBI. “I appreciate that the FBI has a job to do, and I am glad they are finally taking an interest in these concerning financial matters that our committees have been investigating for months,” Senator Ron Johnson (R-Wisconsin) said in a statement.

Bobulinski issued a statement to the press Thursday evening in Nashville, shortly before the debate between Biden and President Donald Trump, saying the former vice president was “plainly familiar at least at a high level” with Hunter Biden’s business plans in China. Bobulinski said he was introduced to Joe Biden by Hunter Biden, and that they had an hour-long meeting to discuss the Bidens’ planned Chinese business ventures. (RT)