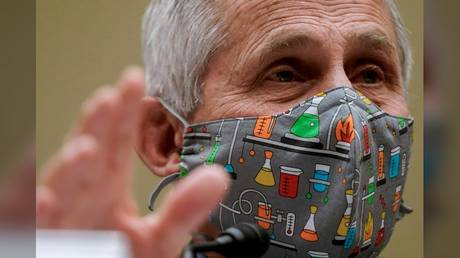 Dr. Anthony Fauci, health adviser turned celebrity by the Covid-19 pandemic, has suggested that the virus is even more deadly than reported, saying the US has “undercounted” its world-leading death toll.

“I think there’s no doubt that we are and have been undercounting,” Fauci said on Sunday during NBC’s ‘Meet the Press’ program. Asked by host Chuck Todd about a University of Washington study which said there were more than 900,000 US Covid-19 deaths, exceeding the official count of 581,000, the doctor replied, “That’s a bit more than I would have thought the undercounting was, but sometimes the models are right on line, sometimes they’re a bit off.”

Todd joined Fauci, chief medical adviser to President Joe Biden, in hyping the death toll. He said the Washington estimate was “almost double what we were able to track,” although it was only about 55% higher than the reported total.

When Fauci ended the interview by saying that the study was a reminder of the pandemic’s historic proportions, “the likes of which we haven’t seen in over 100 years,” Todd said, “That’s true, and it looks like these numbers are going to make 1918 look a bit smaller than what we’ve dealt with now.”

According to the CDC, the 1918 influenza pandemic killed at least 50 million people globally – 15 times Covid-19’s current toll – and 675,000 in the US. The US per-capita death toll in 1918 was nearly 2.5 times the per-capita rate implied by the University of Washington’s death estimate for Covid-19. 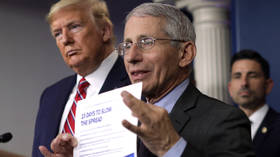 Like ‘15 days to slow the spread?’ Fauci advises India to SHUT DOWN country ‘for a few weeks’ amid record Covid-19 surge

That’s the same university which warned New York would need 49,000 regular hospital beds and 8,000 intensive care unit beds to deal with its Covid-19 carnage. The actual peaks were 18,825 regular beds and 5,225 ICU beds in April 2020. “They were all wrong, they were all wrong,” Governor Andrew Cuomo said of the projections by the University of Washington and others.

Critics of Covid-19 lockdowns, such as author Alex Berenson, have argued that deaths from the virus were overcounted, not undercounted. Additional causes of death are listed for 94% of the people who are counted as US Covid-19 deaths, according to the CDC. (RT)