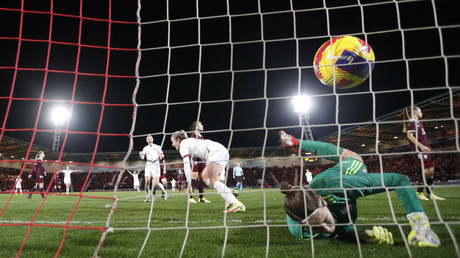 The England national team manager has questioned the value of mismatches to the development of the women’s sport after her side hammered Latvia 20-0 in a World Cup Qualifier.

Four player bagged hat-tricks in the mauling at the Keepmoat Stadium in Doncaster, with Lauren Hemp leading the way with four goals.

Chelsea’s Bethany England scored twice among no fewer than 10 goalscorers in total throughout the massacre.

As was the case when Belgium hammered Armenia 19-0 last week, many were left unimpressed by the rout – including England bos Sarina Wiegman.

“In every country you want to develop the women’s game, but I don’t think it’s good that the scores are so high.

“I know it has the attention of the federations and I think that’s good as I don’t think 20-0 is good for the development of anyone.

“We really need some top-level games now, which we’re going to have [next year], because then we’ll really know where we are.”

The biggest victory for any England senior squad ever! 💥 pic.twitter.com/jaVM1KZwqw

🏆 THE RECORD IS BROKEN 🏆@ellsbells89 is our new all-time record goalscorer! pic.twitter.com/kfwUg1KaUX

Even England fans had misgivings despite the Lionesses adding to their hefty positive goal difference at the top of Group D with six wins from six.

Sharing a screenshot of the scoreboard, one asked: “Is it actually a good result for the development of the Women’s game?

A great result for England but is it actually a good result for the development of the Women’s game?What do you really learn from a 20-0 thrashing? pic.twitter.com/J5S3NIxrQV

Can’t say I’m enjoying this Tom. Even when England were at their weakest the heaviest defeat was 8-0. This is very silly – 10 mins left and it could be 20-0

Replying to a post by a reporter, a fan said that he wasn’t enjoying the action and pointed out that even “at their weakest”, England’s heaviest defeat was 8-0.

Read more:   Azerbaijani MFA decides not to blacklist Ukrainian citizens after their request

“This is very silly – 10 mins left and it could be 20-0,” they correctly predicted as the score increased.

Some of the scorn was in response to a viral clip of Latvia ‘keeper Laura Sinutkina delivering a poor goal kick.

Despite her trying to hit the ball forward, the effort flew out for a goal-kick not far from the penalty area.

England men’s captain Harry Kane congratulated Ellen White after she became the leading scorer for the Lionesses with 48 goals from 101 games. pic.twitter.com/LYBVKW5WZ6

“These are part-timers [and] probably stay-at-home mums,” one viewer pointed out.

“Based on revenue, [the] American women’s national team should get equal pay.”

The hero of the night, was perhaps Ellen White, whose 48 goals now make her the England women’s all-time top scorer.

These are part timers probably stay at home mums. Watch a Chelsea womens game or arsenal womens game. Watch the Matilda’s you’ll see a difference. Based on revenue American women national team should get equal pay.

“It was very emotional on the pitch,” said the Manchester City striker, who received a video message of congratulations from men’s team captain Harry Kane, post-match.

“I feel very proud to represent my country. We have some incredibly talented players coming through, so I feel very lucky to be surrounded by them. I am very proud.