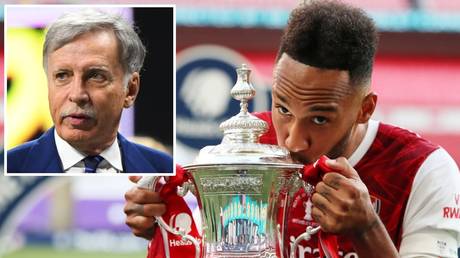 FA Cup winners Arsenal are facing a barrage of negative publicity after announcing that 55 jobs within the club are to be cut due to the coronavirus pandemic, as boss Mikel Arteta plots several lucrative transfer deals.

A statement issued on Wednesday announcing the job cuts explained that the club were taking several measures to address the drop in broadcast revenue endured throughout the ongoing COVID-19 public health issue, with the numerous layoffs affecting the football, commercial and administrative departments of the team.

“In line with other football clubs and many other businesses operating in the sport, leisure and entertainment arena, we have been impacted directly by COVID-19,” head of football Raul Sanllehi and managing director Vinai Venkatesham said.

“Our main sources of income have all reduced significantly. Revenue from broadcasters, matchday and commercial activities have all been hit severely and these impacts will continue into at least the forthcoming 2020-21 season.”

Media gonna blame Özil not taking a pay cut for these Arsenal redundancies and completely ignore the fact they have a billionaire owner who very easily could have prevented this. It’s always the footballer’s fault

As reported by @SamiMokbel81_DM and @johncrossmirror, Arsenal have told Francis Cagigao and other key figures within the scouting network that they no longer have a job. I’m told there is a sense of bemusement at the move to axe such respected personnel.

The club, who finished 8th in the 2019-20 Premier League season, also assured supporters that the drop in revenue won’t impact their dealings in the transfer market with boss Mikel Arteta understood to be running the rule over several transfer targets aimed at arresting the team’s slide in recent seasons.

Read more:   Aus quake: 'You might see this event every 20 years'

Chelsea winger Willian, 32, is thought to be close to agreeing a deal to move from to North London in a move which would likely command a sizeable wage packet, as well as as signing bonus rumored to be in the region £10 million ($13.1 million).

Talismanic striker Pierre-Emerick Aubameyang is also subject of a reported £250,000 per week ($328,000) contract extension to keep one of the league’s top goalscorers at the club.

Arsenal announce 55 redundancies, which at an average salary of (say) £35k a week will save just under £2m from their wage bill which was £232 million last season. Arsenal earned £3.6m for winning the FA Cup and qualified for Europa League next season worth up to £40m #AFC

Arsenal say they plan to shed 55 jobs because of the pandemic. (Owner Stan Kroenke’s wealth estimated at $8.3 billion according to Forbes, up by $400m from Jan to Apr according to the “Billionaire Bonanza 2020” report by Institute for Policy Studies) https://t.co/BfGeXwRiyIhttps://t.co/pml8j5L0nz

However, the cutting of funds in several areas of the club (and the expenditure in others) has led some fans to question the financial planning of the team’s owner Stan Kroenke who has a reported fortune of $8.3 billion (£6.3 billion), per Forbes. Kroenke’s personal wealth is also understood to have grown by around $400 million (£305 million) from January to April of this year.

“We do not make these proposals lightly and have looked at every aspect of the club and our expenditure before reaching this point. We are now entering the required 30-day consultation period on these proposals,” the statement continued. “We know this is upsetting and difficult for our dedicated staff and our focus is on managing this as sensitively as possible.

“These proposed changes are ultimately about ensuring we take this great football club forward, creating the right organization for a post-Covid world, and ensuring we have the resources to return to competing effectively at the top of the game here and in Europe.” (RT)