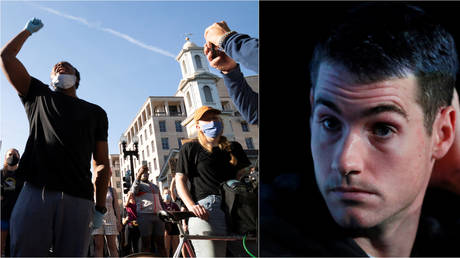 Protests over George Floyd's death in the US © | John Isner © Reuters

John Isner has sparked a bitter row with fans after urging police to arrest people protesting over the death of George Floyd in the US, labeling crowds near the White House “anarchist losers” who are “absolutely pathetic.”

The giant former Grand Slam semi-finalist, known for his marathon matches and 6ft10 frame, was incensed by footage from a news report that appeared to show police letting off tear gas and pepper spray at St John’s Episcopal church in an attempt to quell protests while fires raged inside the building.

Shortly afterwards, US president Donald Trump walked across the street to the church, where heads of state have worshipped for almost 200 years, to pose for photographers while holding up a bible in a move that was later strongly denounced by religious leaders.

“This is absolutely pathetic,” responded Isner to the crowd scenes, having also liked tweets reporting that UFC champion Jon Jones and NBA star JR Smith had been involved in confrontations with protestors. “Arrest these anarchist losers.”

St Johns church is a 205 years old historic landmark and place of healing. This is absolutely pathetic. Arrest these anarchist losers. https://t.co/mWSFFO3QFQ

Discussing the escalating protests since the death of George Floyd at the hands of police, Isner’s responses to outraged fans were as unswerving as his famous thunderous serve. “Why are you more angry about this – a disgusting act which I as a Christian hate as well – than black lives being taken away?” asked one.

“This isn’t just about George Floyd, this is about years and years of systematic racism that kills black men disproportionately.”

The world number 21 shot back: “You have it all wrong. I’m angry that these riots are dishonoring those men and the men and women before them that have been victims of awful brutality. Shouldn’t be that hard to understand.”

One supporter said that they had been appalled by Isner’s behavior on Twitter despite “idolizing” the Texan from a young age. “Seeing you favorite the tweets you have and say the things you have is utterly disgusting and disturbing,” they added.

Isner replied by insisting that he was only condemning rioting and looting. “What happened in Georgia and Minnesota is a massive stain on our great country,” he argued. “It’s incomprehensible. I appreciate you being a fan.”

You have it all wrong. I’m not angrier about this than the death of Floyd and Arbery. I’m angry that these riots are dishonoring those men and the men and women before them that have been victims of awful brutality. Shouldn’t be that hard to understand

If liking tweets condemning rioting and looting is offensive then my bad. Of course they matter, and now more than ever. What happened in Georgia and Minnesota is a massive stain on our great country. It’s incomprehensible. I appreciate you being a fan.

John, you could not control your temper multiple times in your career on the court. Broken racquets, yelling. So now you can judge the anger and vandalism of blacks who have been abused by cops for decades? Your white privilege is epic.

The 35-year-old also criticized the “bold stance” of a respondent who told him that his views were “calling for death”, repeated Trump’s view that anti-fascist group Antifa are terrorists, claimed some protestors “couldn’t tell you George Floyd’s name” and told a commenter to “get your head out of your a***.”

While some supporters offered their backing to Isner, others pointed to scathing remarks made by the Episcopal bishop of Washington, who voiced her disdain at the use of the church as a “prop” by Trump and said his message was “antithetical to the teachings of Jesus.”

Isner’s words echoed his remarks on Colin Kaepernick, the NFL star who caused controversy by choosing to snub a pre-match rendition of the national anthem as a protest over the treatment of people of color in the US in 2016. (RT)