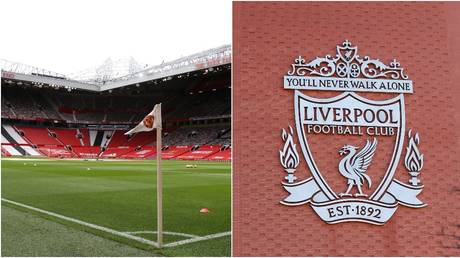 Manchester United and Liverpool are reportedly part of the plans. © Reuters

Manchester United and Liverpool are reportedly among a selection of clubs in talks to found a new ‘European Premier League,’ a $6 billion tournament said to be backed by FIFA which could launch as early as 2022.

Sky Sports reported more than 12 clubs across Europe’s top five leagues – the Premier League, Bundesliga, La Liga, Serie A and Ligue 1 – are in negotiations with financiers to create the new 16 or 18-team competition, described as “potentially the most important development in world club football for decades.”

Real Madrid are said to be one of the driving forces behind the project, while Barcelona, Atletico Madrid, Chelsea, Arsenal, Manchester City and Tottenham Hotspur have also been named as clubs approached in regards to joining.

Although all of the Premier League’s ‘Big Six’ have seemingly been approached, it’s said there may only be spots for five of them.

The European Premier League is expected to follow a home-and-away league format before concluding with a knockout play-off tournament, with the winner taking home hundreds of millions in prize money annually.

It’s said the clubs involved – at least in the short term – would not be ending their involvement in their domestic leagues, although it is unclear how they would fit in the extra fixtures alongside their regular games.

Indeed, several “key details” of the plans, including which clubs will participate and how many will form the league, are not yet concrete.

Wall Street bank JP Morgan is in negotiations to provide $6 billion of debt financing – which would be paid back through the broadcast revenue generated by the competition – to get the project off the ground, and other banks are expected to join them in investing.

According to some insiders, UEFA – who are expected to revamp the format of the Champions League in four years’ time – are not on board with the project.

If that is the case, European football’s governing body is likely to strongly oppose the creation of a rival tournament and it’s said there could be a protracted legal battle before the competition can launch.

Fans reacted angrily to the news on social media, who suggested “football is done,” and branded the plans “disgusting” and “one of the most dangerous moments in football history.”

“So rich clubs who recently moaned about fixture congestion, now want to form a new competition (likely to the detriment of the league cup) to make themselves richer and increase the wealth gap that they said they wanted to lessen just two weeks ago? Ok…” added another.

Disgusting, what is happening to football these days.

So rich clubs who recently moaned about fixture congestion, now want to form a new competition (likely to the detriment of the league cup) to make themselves richer and increase the wealth gap that they said they wanted to lessen just two weeks ago? Ok… 👍🏻

United and Liverpool caught flak in particular for their involvement in the project.

One disgruntled Twitter user described them as the “worst clubs in England,” while another said: “If they wanna leave the Premier League so bad, just let them go.”

News of the plans comes little more than a week after details of ‘Project Big Picture’ – a plan spearheaded by Liverpool and United’s US owners to consolidate the power of England’s biggest clubs atop the Premier League – came to light.

Under those proposals – which were unanimously voted down by the league after United and Liverpool performed U-turns amid fierce opposition – only the ‘Big Six’ and three other clubs would have had voting power in an 18-team Premier League.

Other changes included scrapping the Carabao Cup and giving the English Football League 25 percent of the top flight’s annual revenue, including a £250 million advance to help them get through the Covid-19 pandemic.

A European ‘Super League’ has been mooted for several years.

In 2018, Football Leaks documents published by German outlet Der Spiegel revealed that five of the ‘Big Six’ held a meeting two years prior to discuss the formation of such a league, in which they – along with fellow proposed founders Real, Barca, Juventus, AC Milan, Paris Saint-Germain and Bayern Munich – would be immune from relegation. (RT)

Regional authorities in Germany announced that around 29,000 chickens will be slaughtered in the country’s…