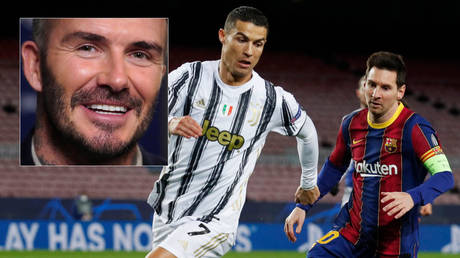 David Beckham, the co-owner of MLS side Inter Miami, has said he wants to bring players of the profile of Lionel Messi and Cristiano Ronaldo to Florida – but fans have laughed off the suggestion that the stars would consider it.

Beckham’s side finished 10th in the MLS Eastern Conference in their debut campaign in the United States top flight last season but the ambitious former England skipper says that he is intent on attracting the type of stars who will help Inter Miami become a dominant force in American soccer.

Beckham – who spent five years with LA Galaxy in the league – has earmarked a host of the sport’s biggest names as transfer targets for his club, even going so far as to say that he is hoping to attract players of the caliber of Messi and Ronaldo, the duo who have sparred for most of football’s major individual honors for more than a decade.

“Those are the type of players that we aspire to bring to our club,” Beckham said recently. “Our fans would really appreciate that, I think. As owners, we want players here who are driven, that want to win. That’s our priority.

🗣”Those are the type of players we aspire to bring to the club”David Beckham answers whether Lionel Messi or Cristiano Ronaldo could play for Inter Miami in the future and references the type of players Sir Alex Ferguson brought to Manchester United pic.twitter.com/YZoIKiCI8Z

“If we have the opportunity to bring some great names in – you obviously mentioned Leo and Cristiano, they’ve been at the top of their game for the last 15 years because of hard work. There’s no luck behind it – of course, there’s a certain amount of luck – but the reason why they are the best is because they work hard.

Of course, there aren’t many clubs in world football for whom the likes of Messi and Ronaldo wouldn’t be “right”. But with both multiple-time Ballon d’Or winners still performing at a high level for Barcelona and Juventus respectively, it seems that any talk of a transfer to a team of the profile of Inter Miami is presumptive at best.

David Beckham says he would like to sign Messi and Ronaldo for Inter Miami one day.Imagine Phil Neville managing those two 😂 pic.twitter.com/AkCiEwTKKf

Which is why he’s gone and signed Ryan Shawcross.

I know Barcelona are in a shambles but why would he move from players like Greizman to Ryan Shawcross?

As some fans have pointed out, Beckham’s reinforcements to date haven’t quite matched the profile of those of Messi and Ronaldo. Former Stoke defender Ryan Shawcross is more the profile of the players the club has targeted thus far.

However, it should be noted that they have added the vastly experienced duo of Blaise Matuidi and Gonzalo Higuian to their ranks in recent times.

Yet even with names of that repute now attached to Beckham’s pet project, it looks as though there is work to be done before the likes of Messi and Ronaldo would consider a move.

Critics pointed out that the superstars would potentially be coached by the distinctly less vaunted Phil Neville, who was a dependable rather than spectacular Premier League player during his time with United and Everton and whose credentials for the Galaxy job he has just taken have been questioned as a result of his mixed record during an occasionally-maligned coaching career so far.

Beckham caused a sensation back in 2007 when at the relatively young age of 32 he eschewed some of Europe’s biggest clubs to sign his own deal with LA Galaxy. It remains to be seen if he has the type of clout required to convince some of the sport’s biggest names to follow suit. (RT)