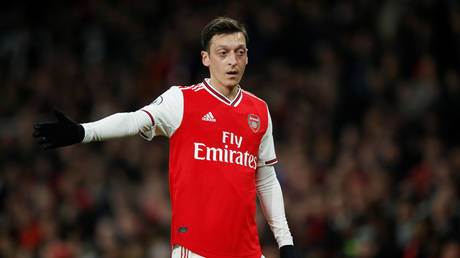 Fans have suggested Mesut Ozil was dropped at Arsenal because of his comments on the persecution of Uighur Muslims in China after he hit out at the club for lacking “loyalty” for leaving him out of their Premier League squad.

Arsenal named their 25-man squad for the 2020-21 Premier League season on Tuesday, and Ozil – who has not played since March – was conspicuous by his absence from the list

The 32-year-old took to Twitter on Wednesday as he vowed to keep “fighting” for his place in the side:

“This is a difficult message to write to the Arsenal fans that I’ve played for over the past few years.

“I’m really deeply disappointed by the fact that I have not been registered for the Premier League season for the time being.

“Upon signing my new contract in 2018, I pledged my loyalty and allegiance to the club that I love, Arsenal, and it saddens me that this has not been reciprocated.

“As I have just found out, loyalty is hard to come by nowadays. I’ve always tried to remain positive from week to week that there’s maybe a chance to get back in the squad soon again. That’s why I kept silent so far.

“Before the Coronavirus break I was really happy with the development under our new coach Mikel Arteta – we’ve been on a positive way and I would say my performances were on a really good level.

“But then things changed, again, and I was not longer allowed to play football for Arsenal. What else can I say? London still feels like home, I still have many good friends in this team, and I still feel a strong connection with the fans of this club.

“No matter what, I will keep fighting for my chance and not let my eighth season at Arsenal end like this. I can promise you that this hard decision won’t change anything in my mindset – I will continue to train as best as I can and wherever possible use my voice against inhumanity and for justice.”

Fans were quick to respond on social media, with many expressing solidarity with the German.

“I will continue to train as best as I can and wherever possible use my voice against inhumanity and for justice,” echoed one. “So we know the real reason why you won’t play. Really sad to see you being treated like that.”

“Ironically, talking about injustices like that is exactly why Ozil was axed from the squad,” another said, while a third added: “And that’s just because he spoke about the Uighur Muslims.”

“It’s clear you’ve been left out for non footballing reasons” one said. “Board clearly haven’t got the guts to stand up for your comments re: China.”

However, another fan offered an alternative theory, that Ozil has primarily been exiled from the team for refusing to accept a pay-cut in April.

I will continue to train as best as I can and wherever possible use my voice against inhumanity and for justice. So we know the real reason why u won’t play. Really sad to see you being treated like that. For Fans, you are a Legend and u will be forever.

Ironically, talking about injustices like that is exactly why Özil was axed from the squad.

And that’s just because he spoke about the Uighur Muslims ❤️

In an Instagram post in December last year, the 32-year-old accused his fellow Muslims of staying silent on the treatment of Uighurs in the Xinjiang region of China, comments Arsenal were quick to distance themselves from.

However, Ozil remained a regular fixture in the Gunners side until the world went into lockdown in March and football was put on hold due to the pandemic. Indeed, between making the comments and his last game on March 7, he featured in all but one league match for the club.

Read more:   Covid-19: New York has more cases of coronavirus than any country

In April, Arsenal players and staff agreed to a 12.5 percent pay-cut – reduced to 7.5 when UEFA Europa League football was secured by winning the FA Cup – but Ozil, as Arsenal’s top earner on £350,000 per week, was widely criticized for not joining his colleagues.

Despite the cuts, the Gunners said in August they would lay off 55 staff members, while earlier this month Ozil stepped in to offer to pay the wages of Jerry Quy – who plays mascot Gunnersaurus – after the club let him go.

Having been left out of both Arsenal’s Premier League and Europa League squads, Ozil won’t get another opportunity to play for the Gunners again until their Carabao Cup quarterfinal with Man City on December 22.

He did not feature against Leicester City or Liverpool in previous rounds, though, so his inclusion seems unlikely barring a significant turnaround in his situation in north London in the next two months.