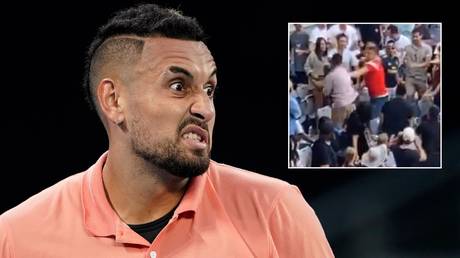 There were ugly scenes in the stands at the Australian Open as fans traded blows ahead of the third-round meeting between local favorite Nick Kyrgios and Russia’s Karen Khachanov.

The players were preparing to make their entrance at Melbourne Arena when a punch-up broke out between two men in the stands, forcing concerned bystanders to step in before the pair were escorted from the arena by security.

Footage of the incident showed a man in a red shirt resembling that worn by the Russian national football team throwing punches at a man next to him, who was also lashing out.

Onlookers stepped in before the pair were led away by security personnel to chants of “out, out, out!” from the crowd.

The scenes played out at Melbourne Arena, which is the third largest at the Melbourne Park complex, behind Rod Laver Arena or Margaret Court Arena.

Local hero Kyrgios, seeded 23rd, was about to take to the court to face Russian 16th seed Khachanov, with a place against Spanish world number one Rafael Nadal in the fourth round at stake.

Melbourne Arena is famed for the intensity of its atmosphere, and Kyrgios had reportedly expressed a preference for his matches to take place there because the Aussie feels fan fervor is at its highest there.

Fans with regular ground passes can attend matches at the venue, as opposed to premium ticket holders who also have access to Rod Laver Arena and Margaret Court Arena.

However, Saturday’s scenes indicated things had got a little too heated, with a witness telling local media “it was a bit of a punch-on.’’

When play did get underway Kyrgios took the first set 6-2 thanks to a double break of serve, although the 24-year-old was forced to contend with injury as he took a medical timeout during the set.

Kyrgios is aiming to reach the fourth round for the first time since 2018, while Khachanov, 23, is bidding to go one better than his run to the third round in 2019.