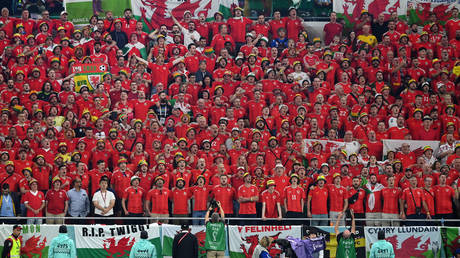 The Welsh FA said it had guarantees from FIFA Wales drew their opening match against the USA on Monday. © Stu Forster / Getty Images

The Welsh Football Association says it has been given assurances by FIFA that fans will be allowed to wear rainbow hats and carry rainbow flags at stadiums in Qatar.

Reports emerged of Welsh fans being told remove their rainbow ‘bucket hats’ before they entered the stadium for their opening World Cup match against the USA in Qatar on Monday.

But ahead of the team’s second Group B match against Iran at the Ahmad bin Ali Stadium on Friday, Welsh football officials said they had received guarantees that the scenes would not be repeated.

“FIFA has confirmed that fans with Rainbow Wall bucket hats and rainbow flags will be allowed entry to the stadium,” read a social media message from the Welsh FA. ‘The Rainbow Wall’ is the name of the Wales’ LGBTQ supporters’ group. (RT)

Following the official welcome ceremony, the President of the Republic of Azerbaijan Ilham Aliyev and…

President Aliyev: ‘A generation has grown up in Azerbaijan that is loyal to the national ideology’

A generation has grown up in Azerbaijan that is loyal to the national ideology, President…